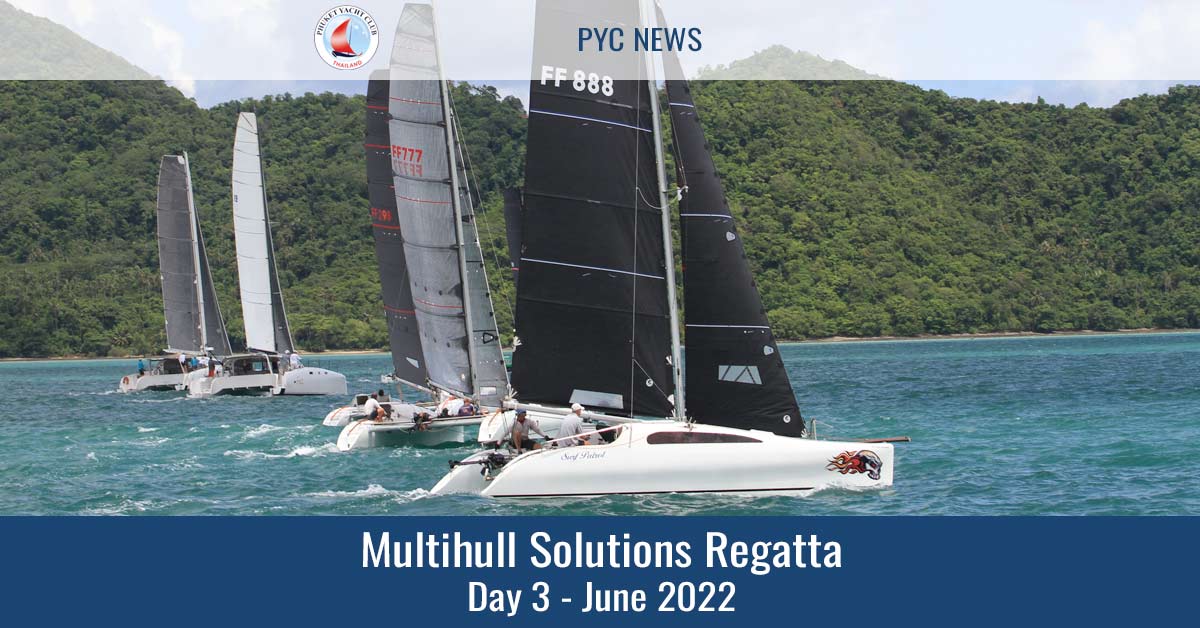 Nothing but blue skies on final day of MSR 2022

In a regatta that saw every type of weather condition save a snowstorm, competitors at the Multihull Solutions regatta saw beautiful sunny skies on the final day of the event.

Competitors suffered through a veritable cornucopia of climate change in the three short days experiencing everything from soft rain to hard pounding rain; no wind to heavy gusts; calm water to large swells; and sunny blue skies versus overcast grey cloud cover.

Racing started at 11:45 on the final day as PRO Simon James was able to get the fleet off a little bit early as all racers were on the course and ready to go. 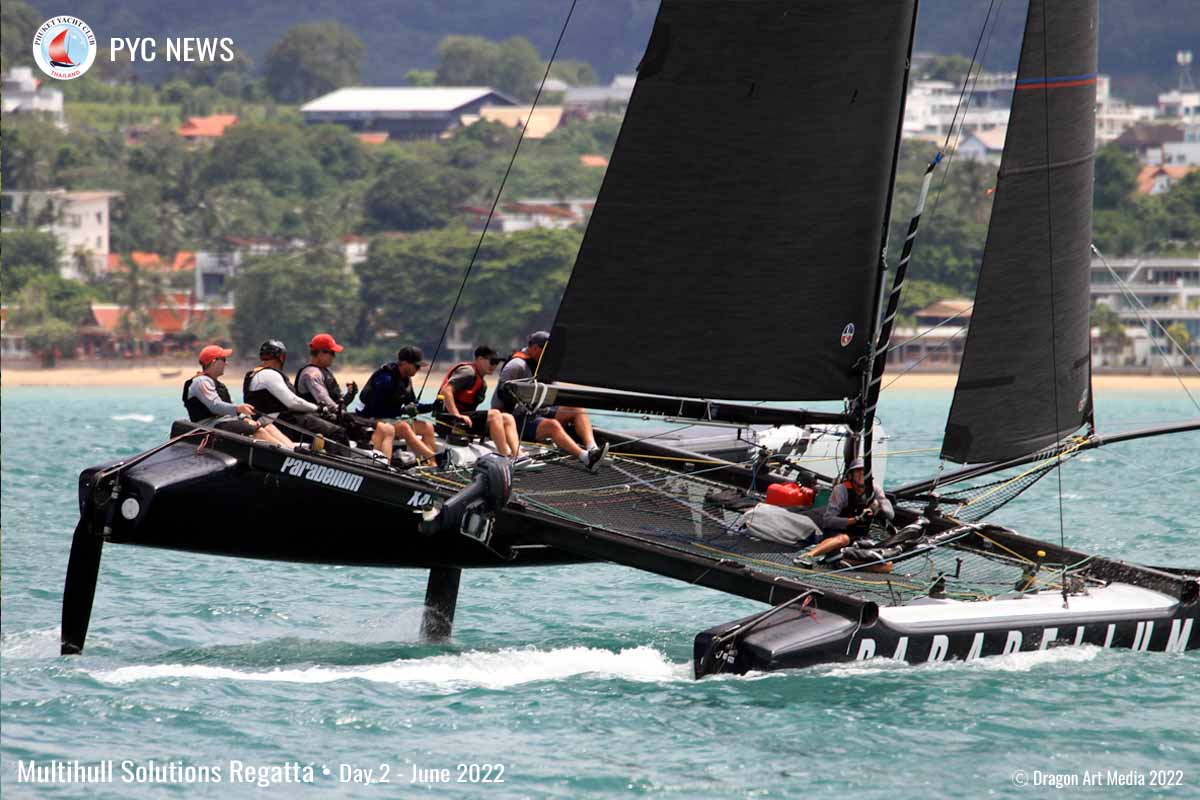 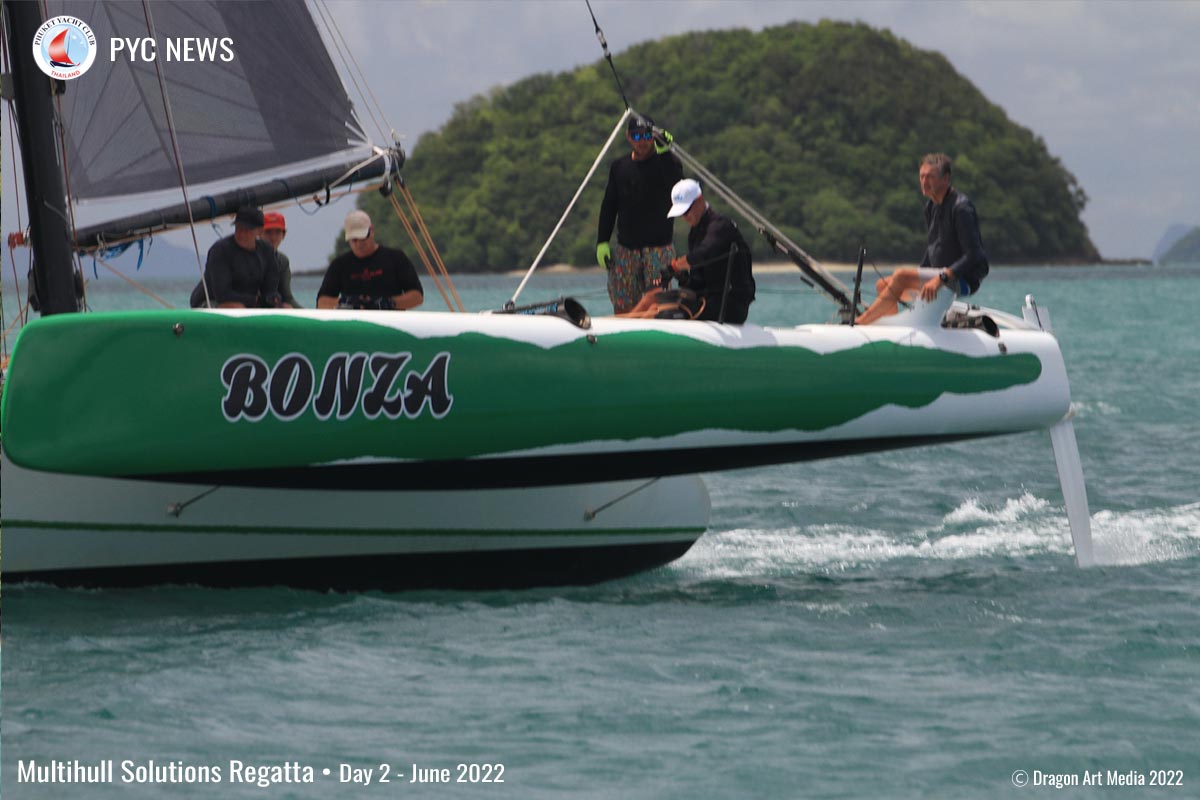 Dan Fidock’s extreme 40 Parabellum won the 2022 Multihull Solutions Regatta as it swept all six races it started, even though it did not participate in the final race of the regatta. John Coffin’s Fez, helmed by Mick Coleman, took second spot as it also sailed in six races, earning a DNF in the final race, after being involved in a minor collision with Twin Sharks.

Warwick Downes’ Bonza, which won the regatta two years ago, placed third as it suffered through a variety of equipment problems including a ripped main sail on day one. It is used to stunning the crowd with its hull lifts but lost a little bit of its thunder to Parabellum in this regatta. Glywn Rowlands’s Twister 2 rounded out the four-boat class. The final score sheet after a drop for each boat had Parabellum with 6 pts followed by Fez (8 pts), Bonza (18 pts) and Twister 2 (21 pts).

The five-boat “Combined Cruising” class saw Dane Niels Degenkolw’s Phoenix win again as his eight-man boat won every race in its class, followed by Bill Kane’s The Sting with Mike Downard’s Magic from Sail in Asia in third, Paul Flatty Baker’s Mas Alegre of the Java Racing fleet (hampered with only four crew) came fourth and Peter Dyer’s Venture placed fifth. The final point tally after the drop had Phoenix with sixpoints, followed by The Sting (14 pts), Magic (15 pts) Mas Alegre (25.5points) and Venture in fifth spot with 27points. 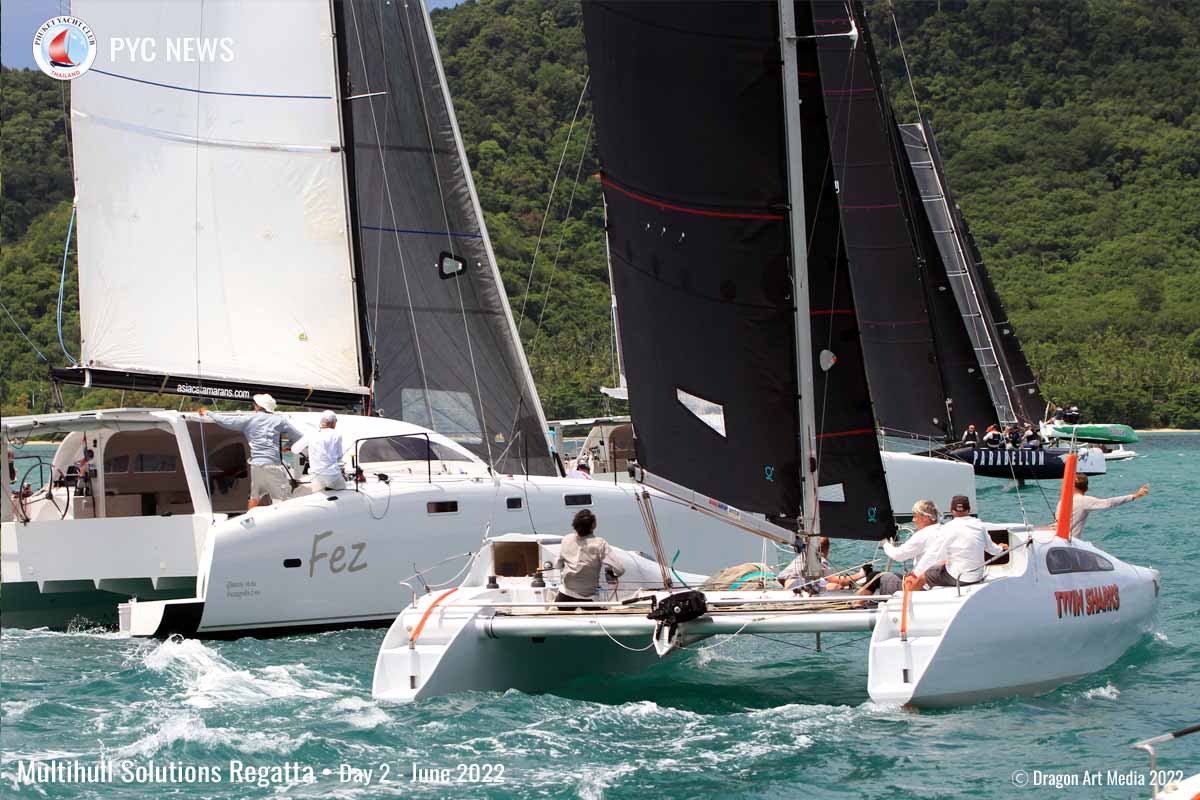 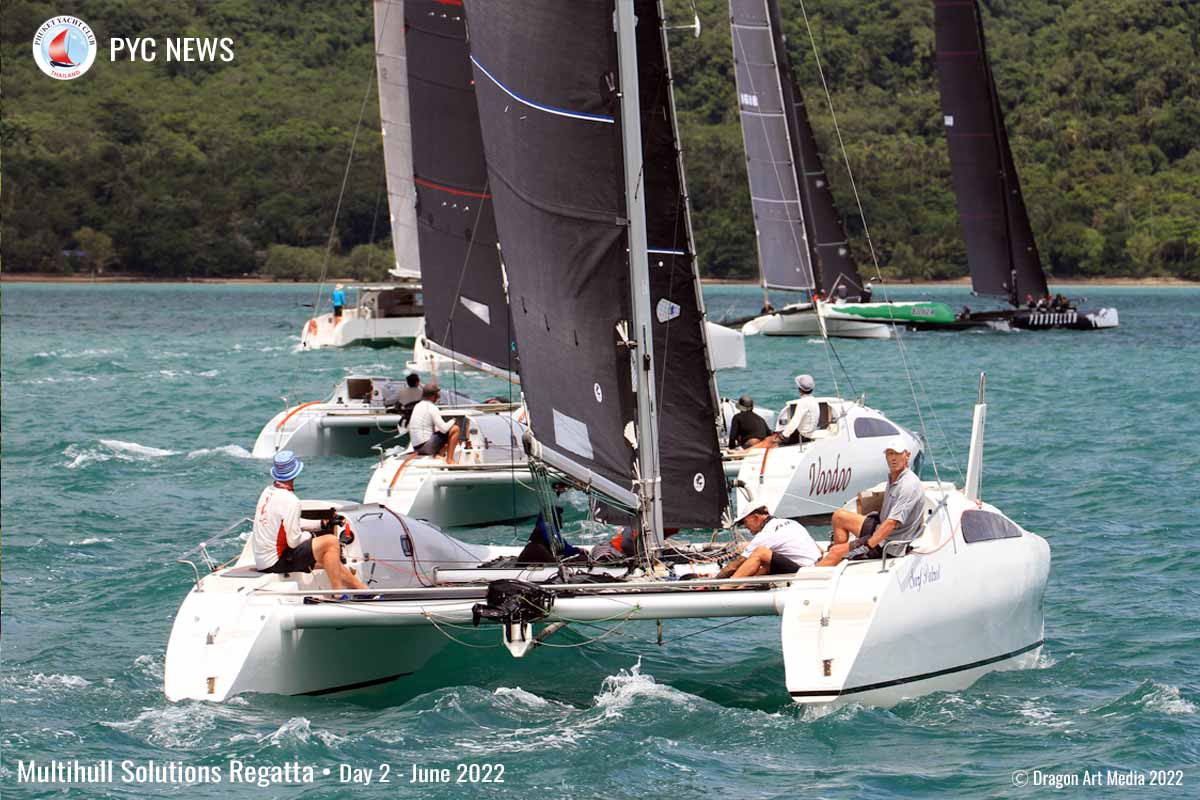 The predominately female crew of Jessandra did not sail in the regatta as owner Andrew McDermott just sold the boat although some of its regular sailors did participate in the regatta including Lies Sol, who sailed with The Sting.

There was some controversy today as John Newnham’s Twin Sharks protested John Coffin’s Fez. The three-man protest committee consisting of Peter Dyer, Merv Owen, Niels Degenkolw, heard the protest and upheld it ruling that Twin Sharks has obtained an overlap of three boat lengths and therefore was entitled to room at the mark (rule 18).

There was a buffet dinner and awards ceremony at the Phuket Yacht Club Sunday evening. James Haste, once again, did a super job as MC on the evening.

The event could not have happened without the generous sponsorship of Multihull Solutions (& The Yacht Sales Co), Octopus Electrical, East Marine Asia and Boat Lagoon Phuket.

And a big shout-out to weather seer PRO Simon James and his team for setting up the courses and running the regatta, as they got in as much racing as possible for all the competitors. 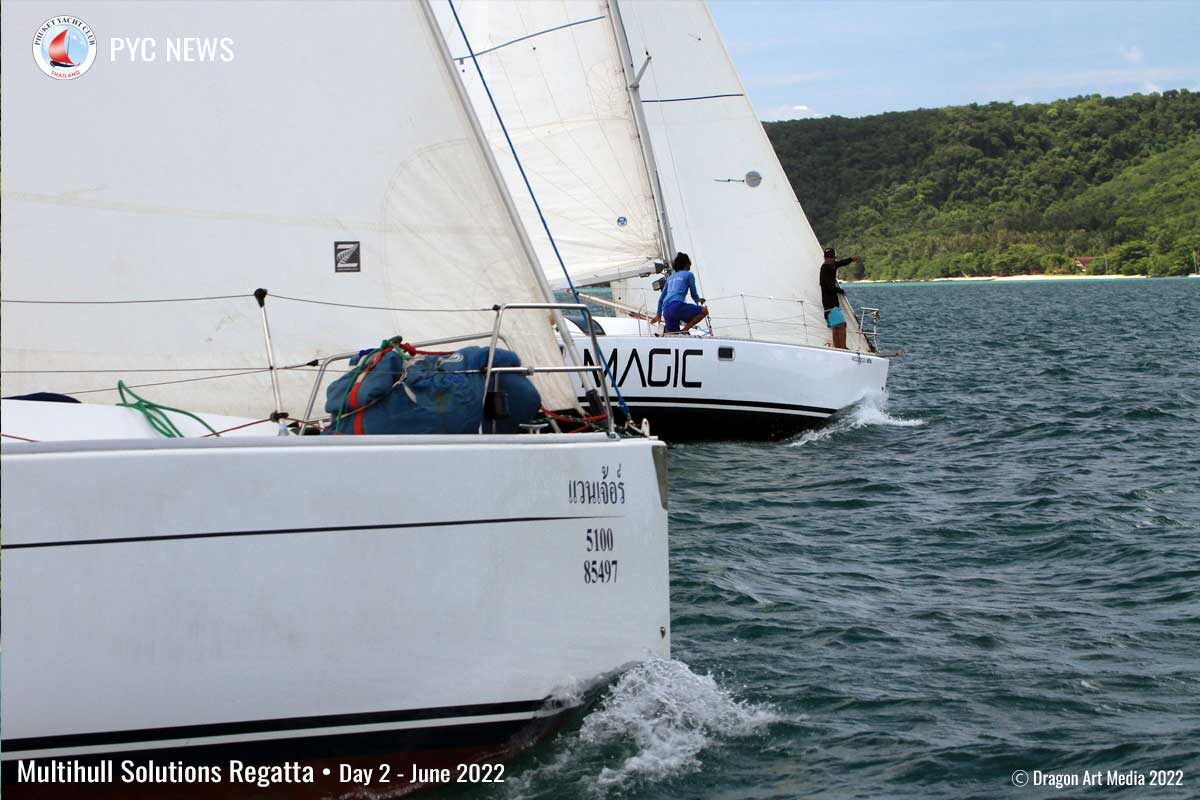 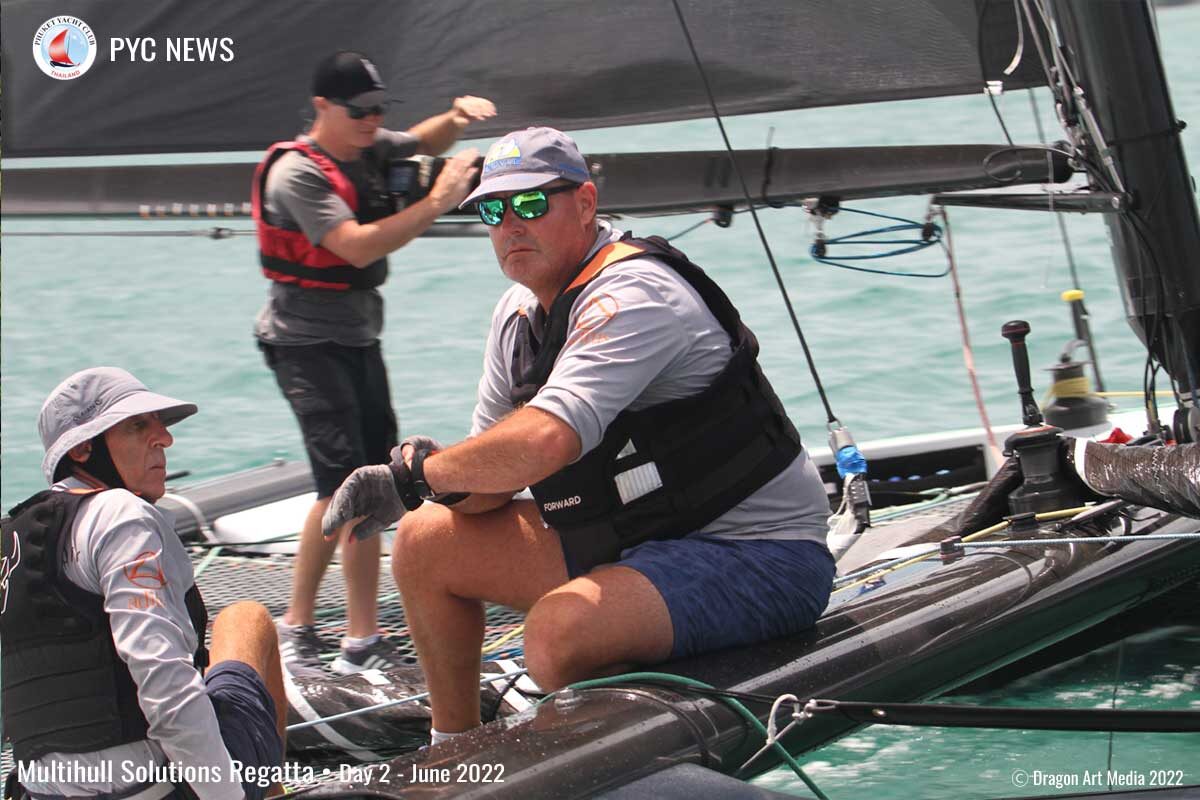 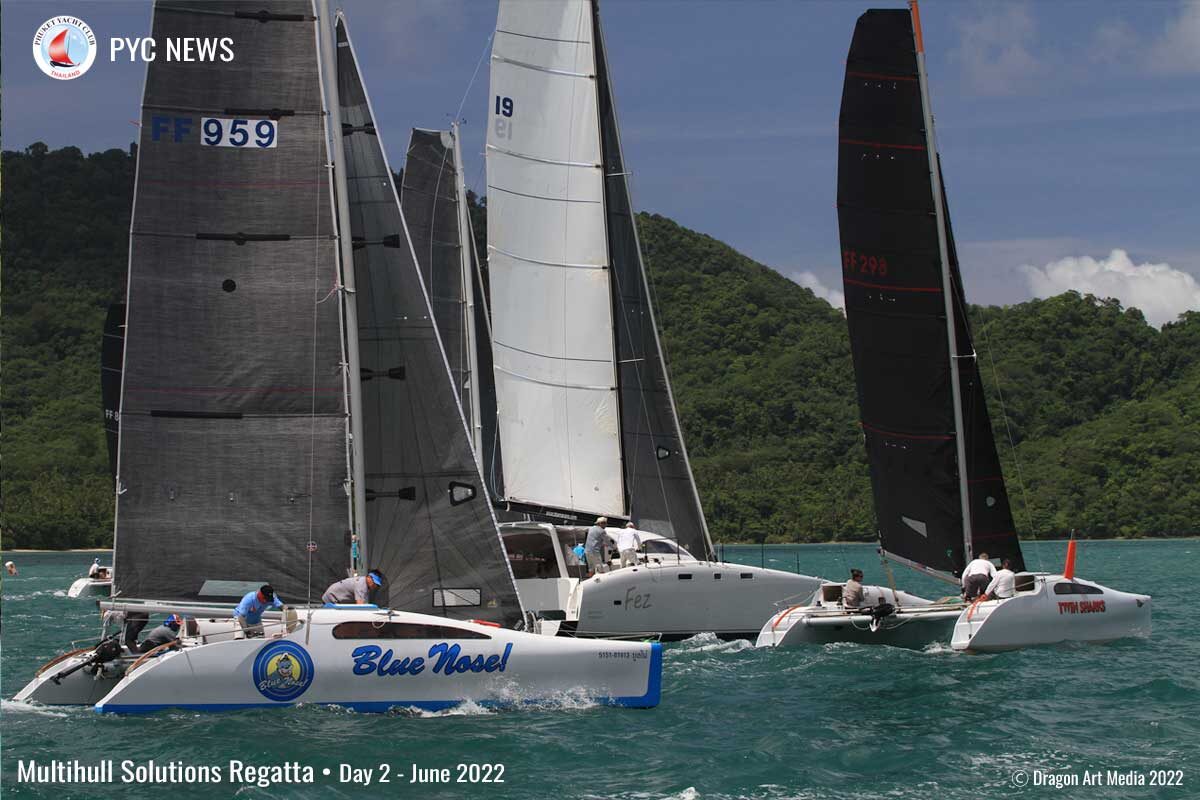 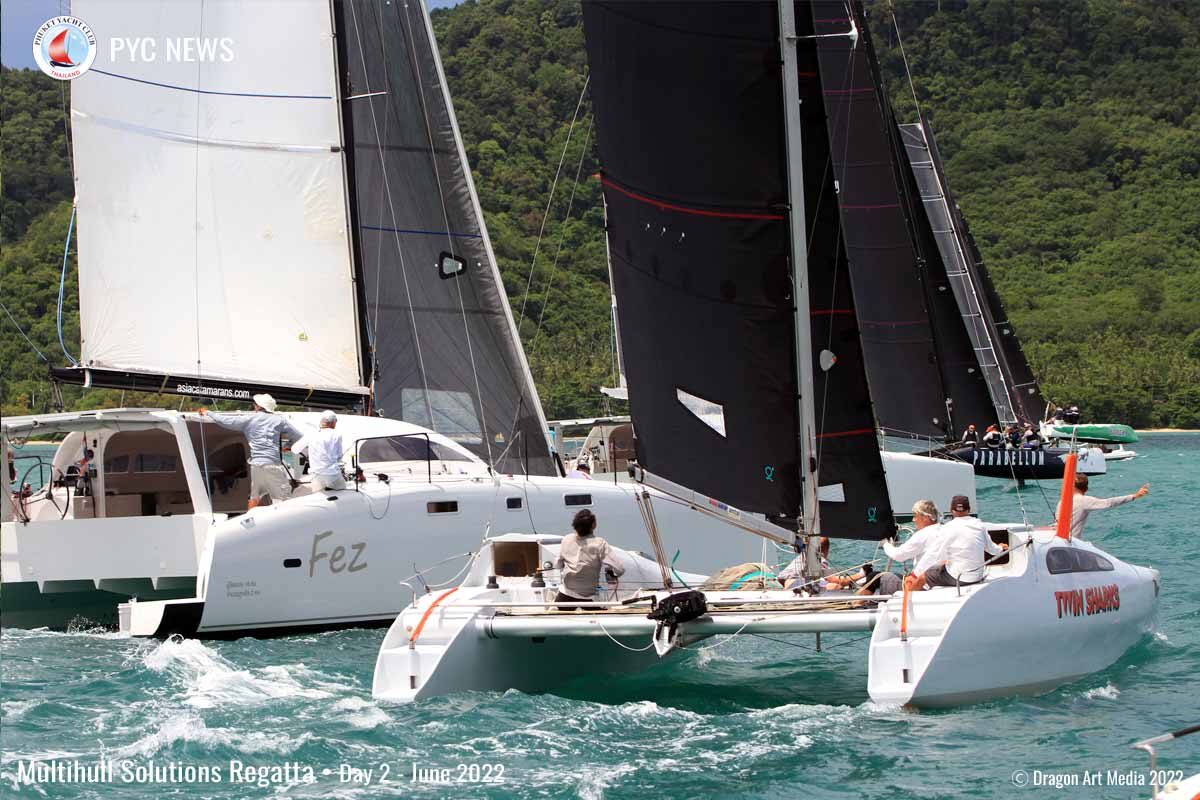 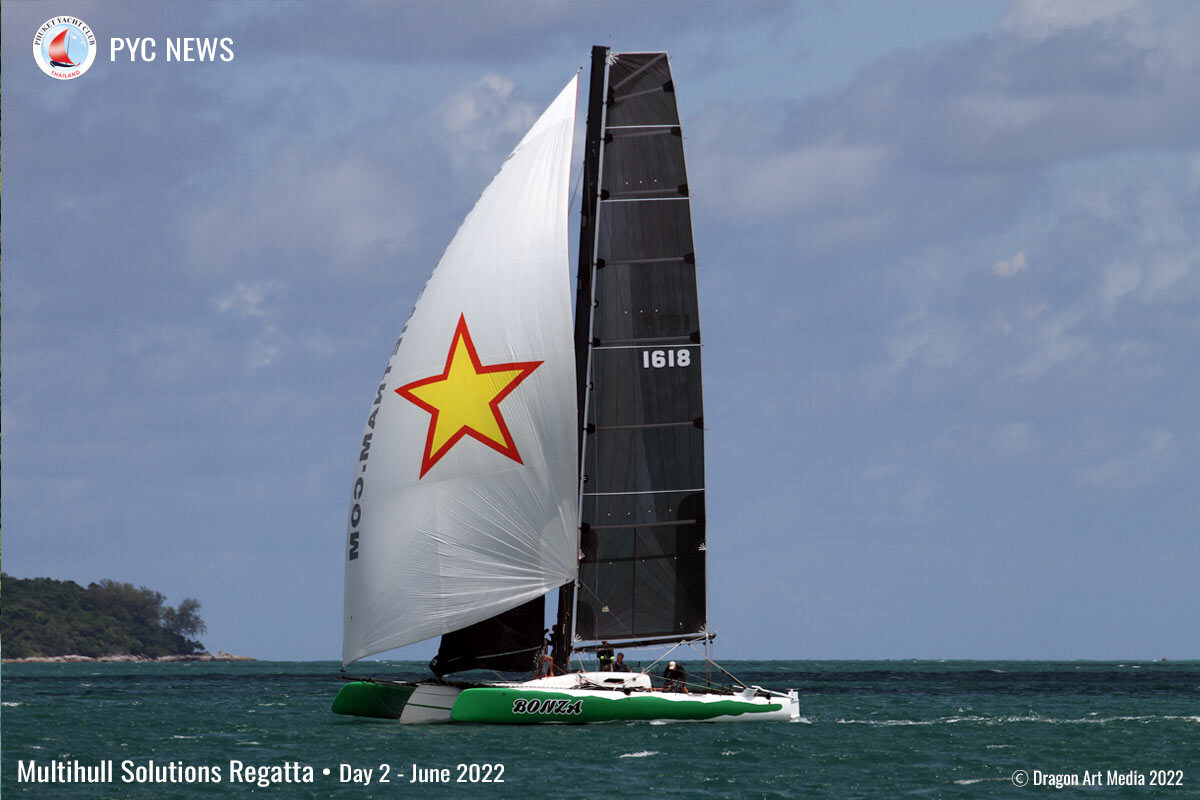 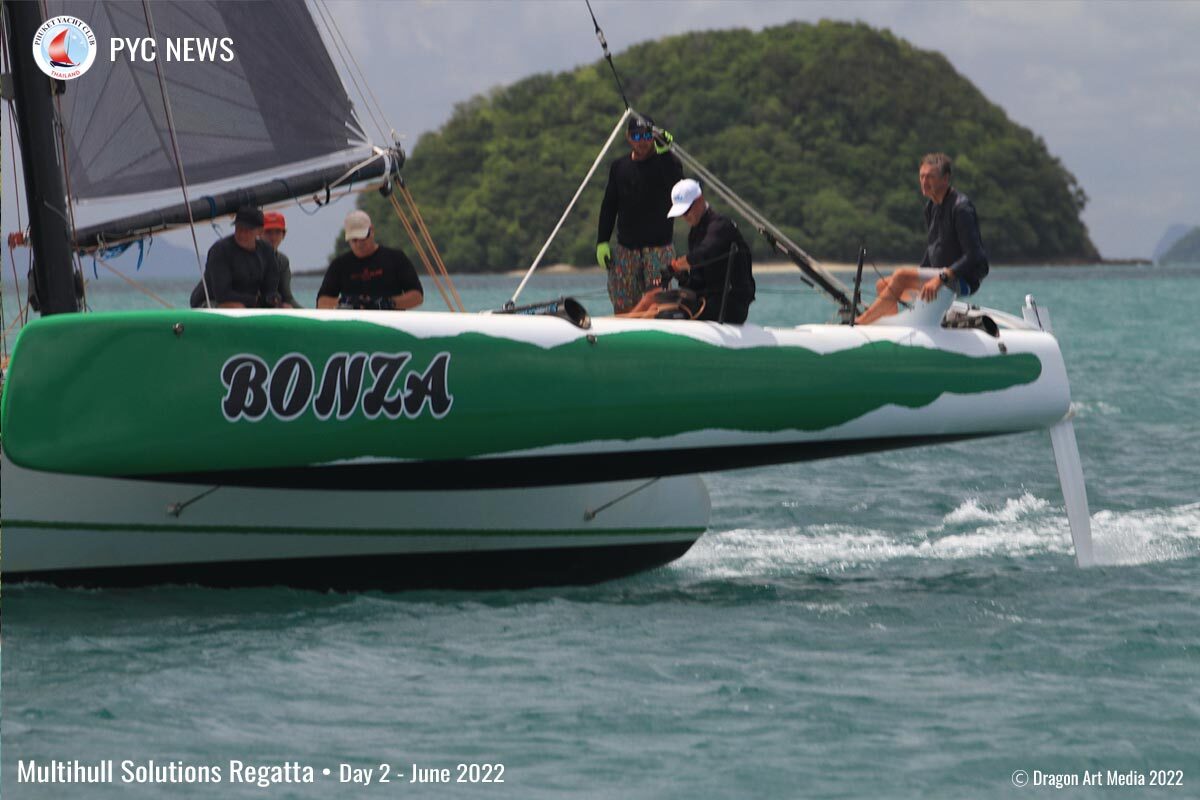 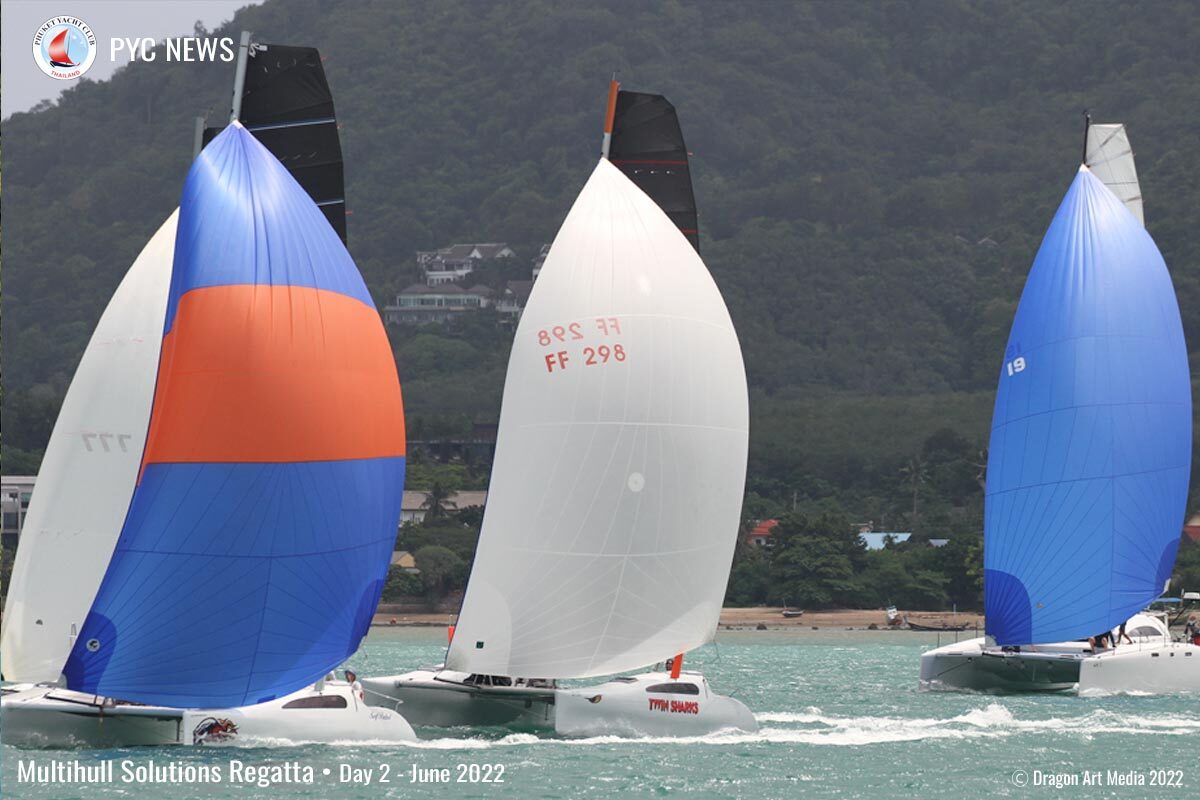 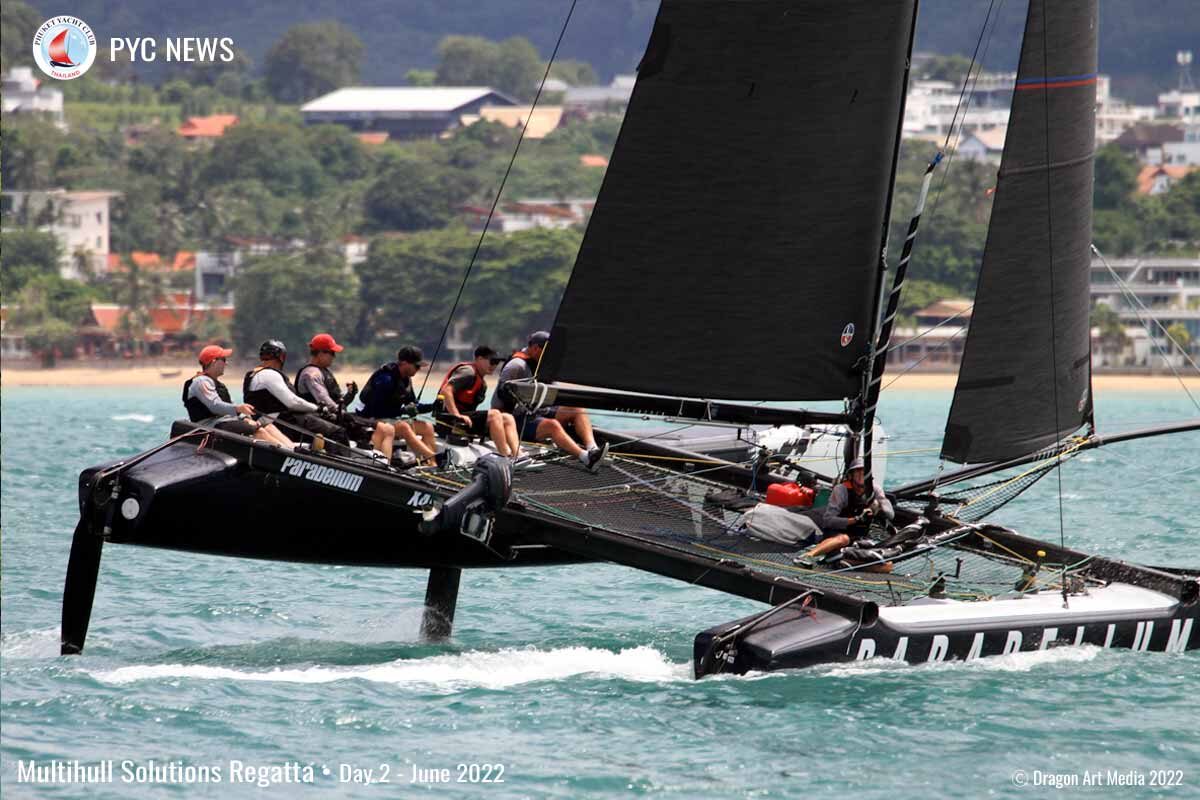 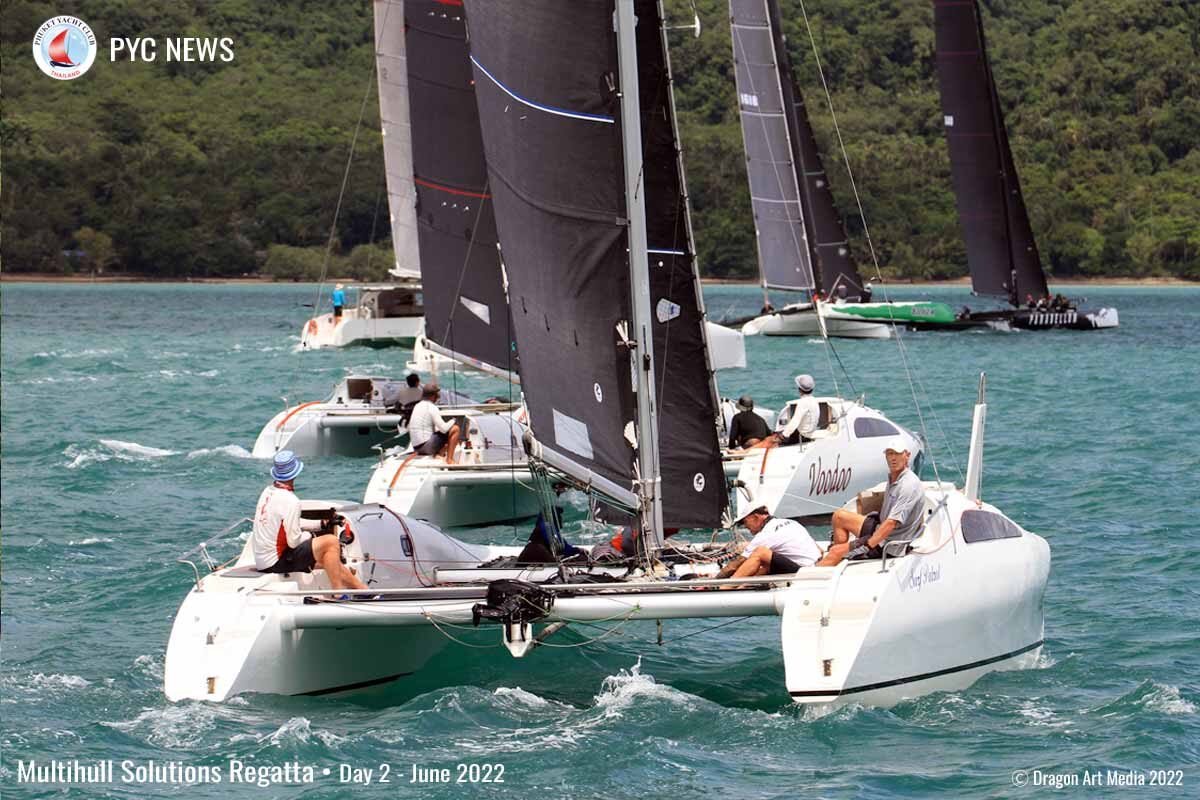 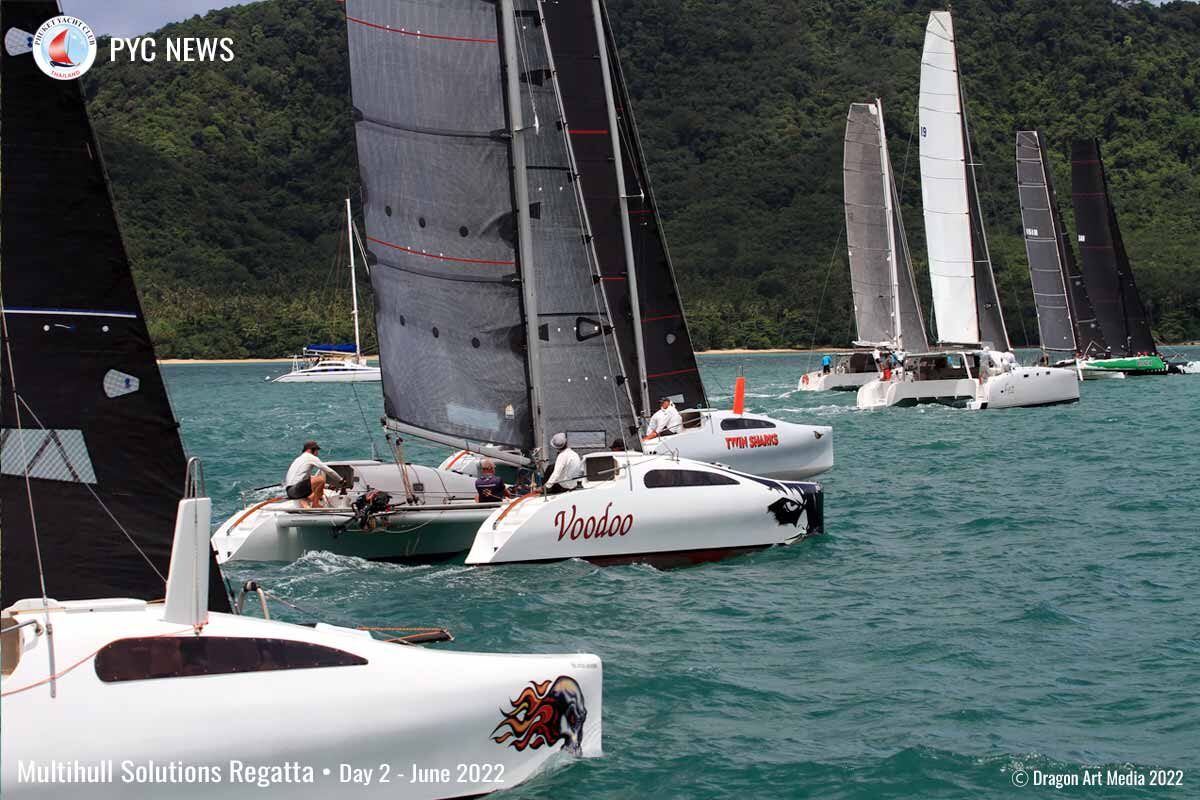 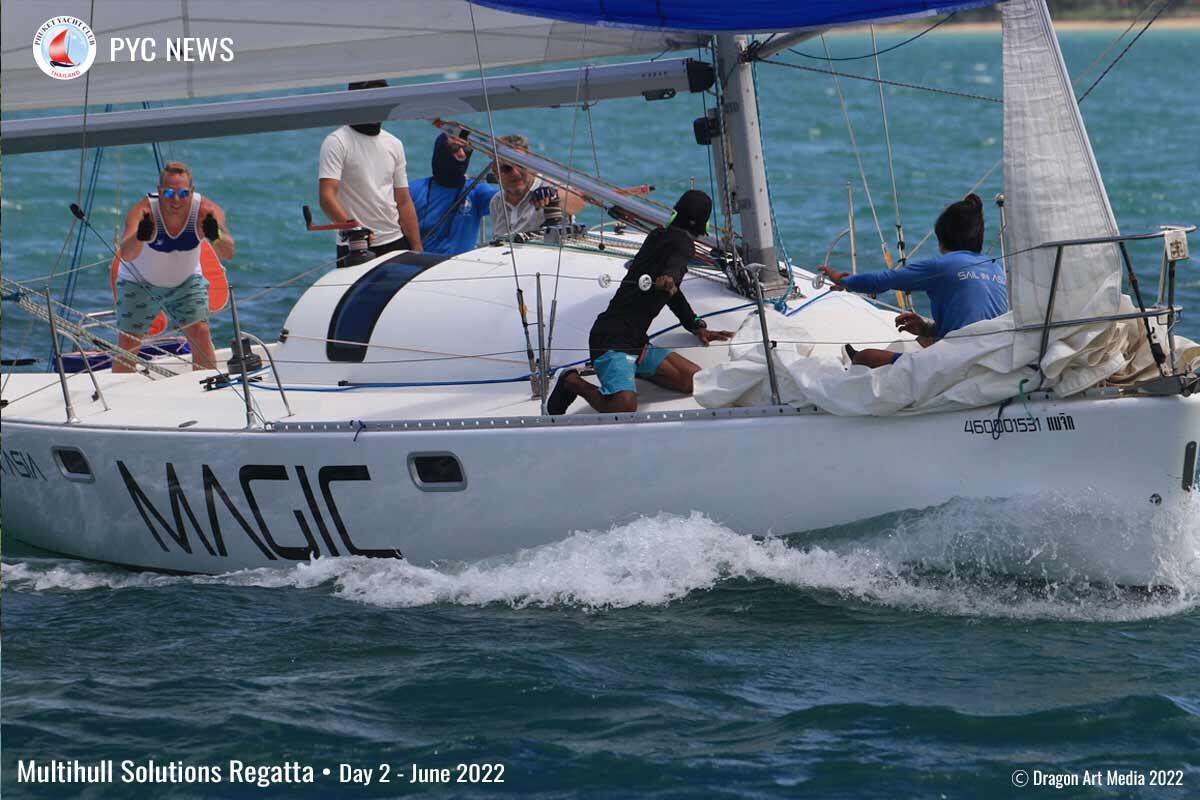 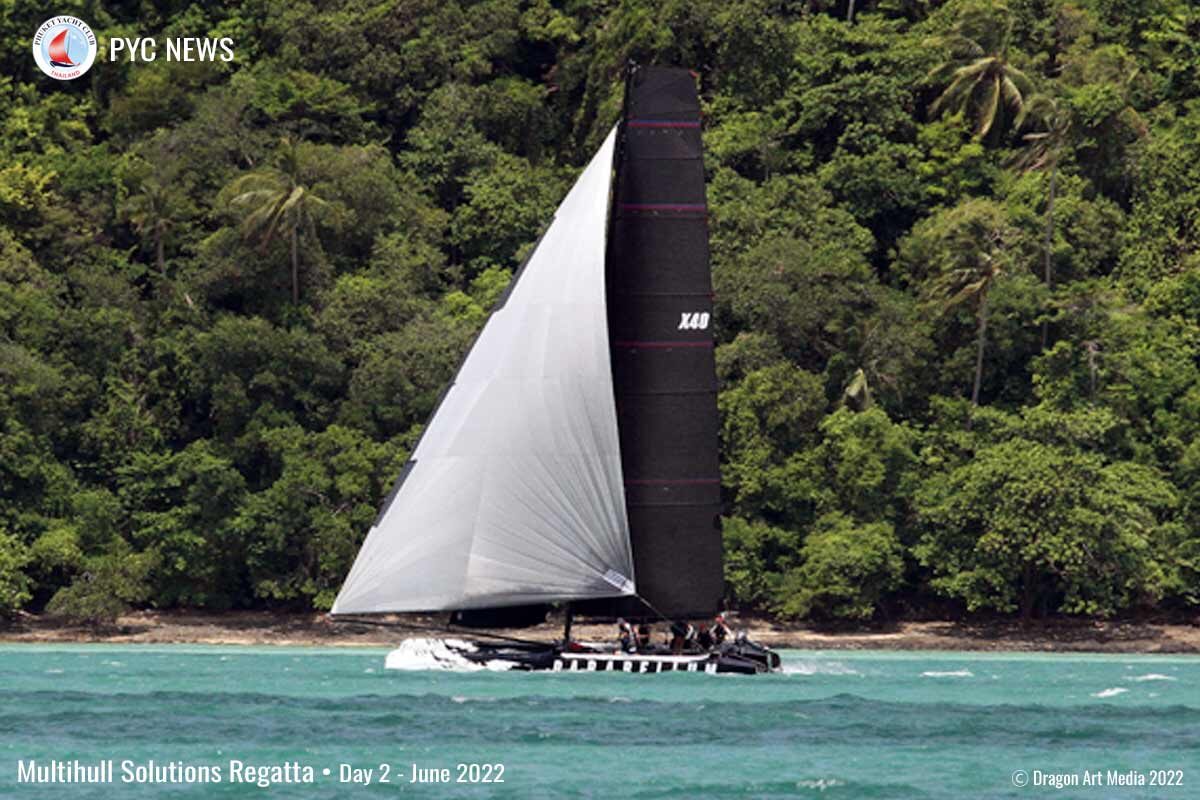 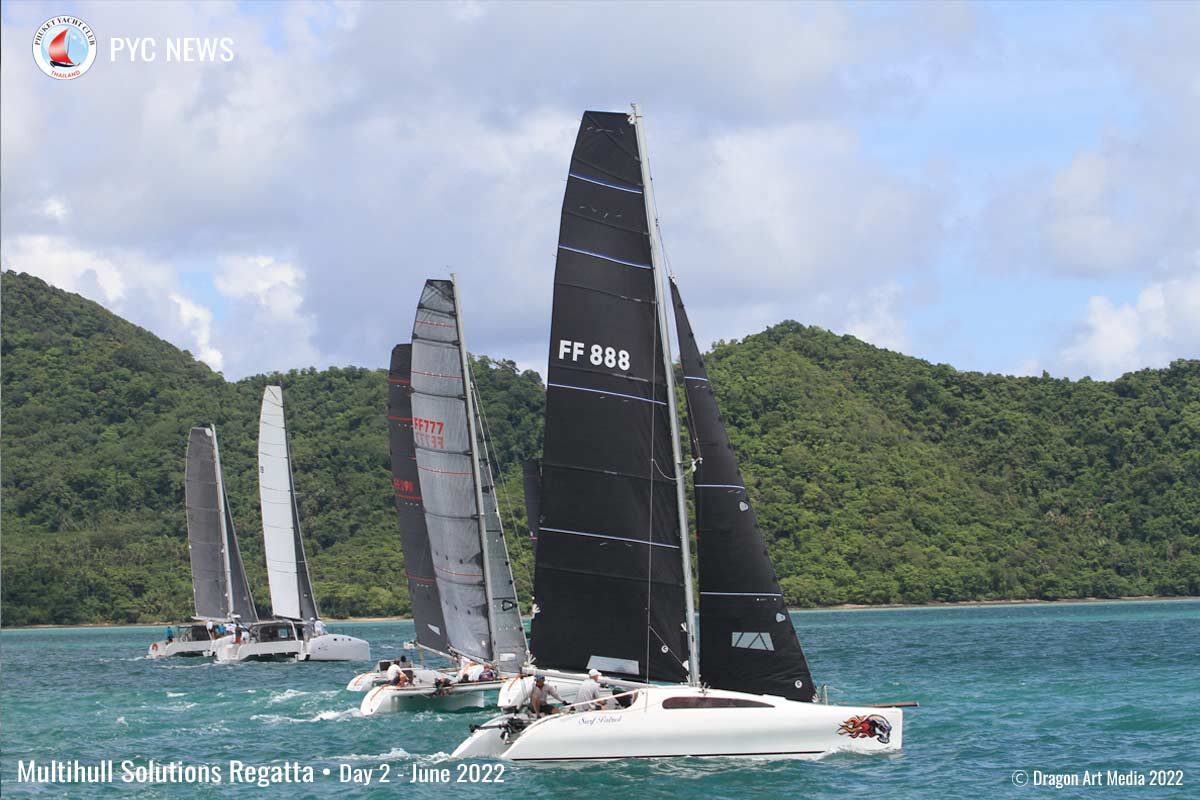