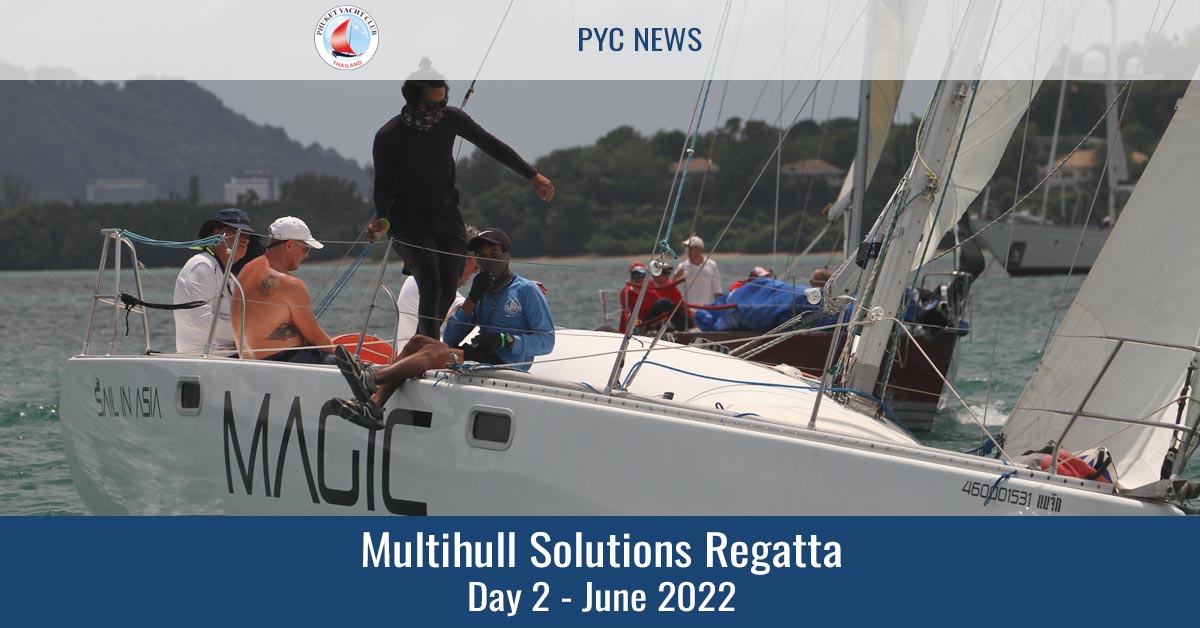 Racing started on time today and PRO Simon James was able to get in a race each for the Multihull Racing and Combined Cruising classes, with the Firefly 850 Sport class getting in two races before racing was called due to heavy rain and stormy weather.

Even in a sheltered bay like Ao Chalong weather patterns can change quickly and drastically as was evidenced today with light winds and sunny skies to start turning quickly into gale force winds of 36 knots in no time. Luckily no boats were severely damaged, but they could have easily been so.

The drizzle that started the day turned to thunderstorms and the variety of rainfall was like a scene out of Forrest Gump, “There was little bitty stingin' rain...and big ol' fat rain. Rain that flew in sideways. And sometimes rain even seemed to come straight up from underneath.” 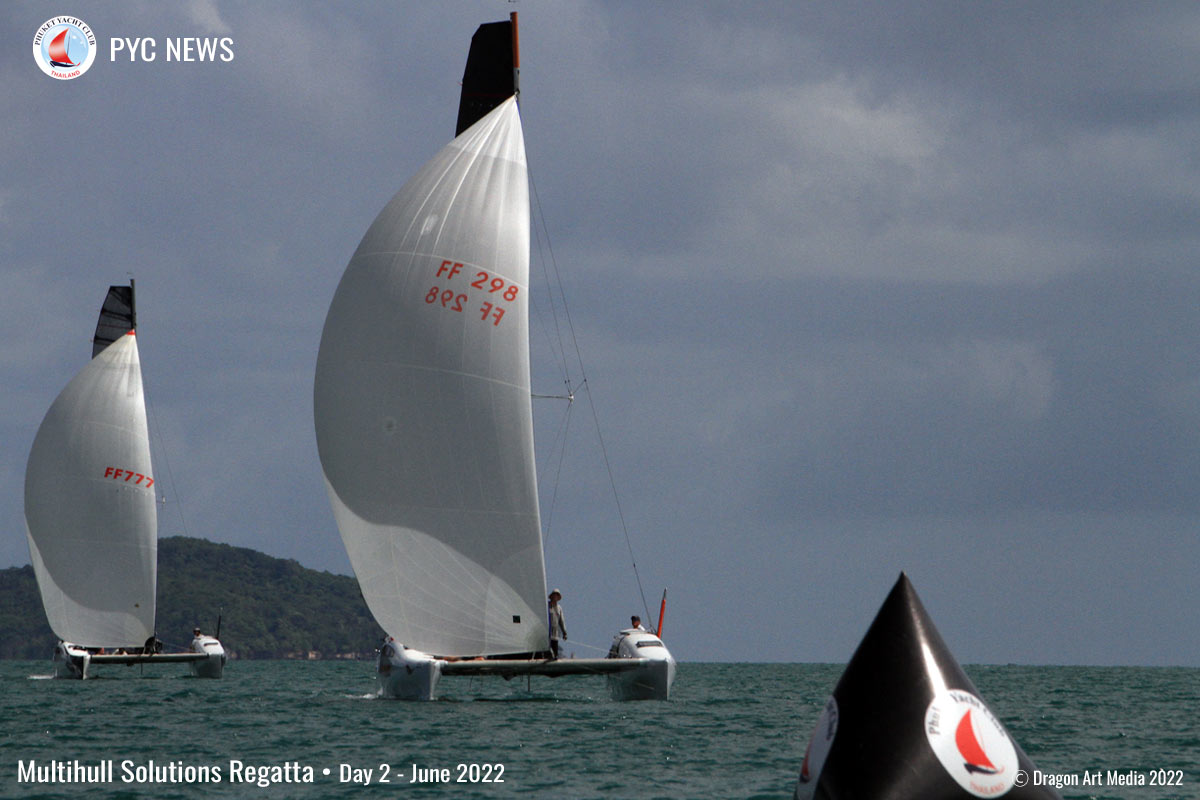 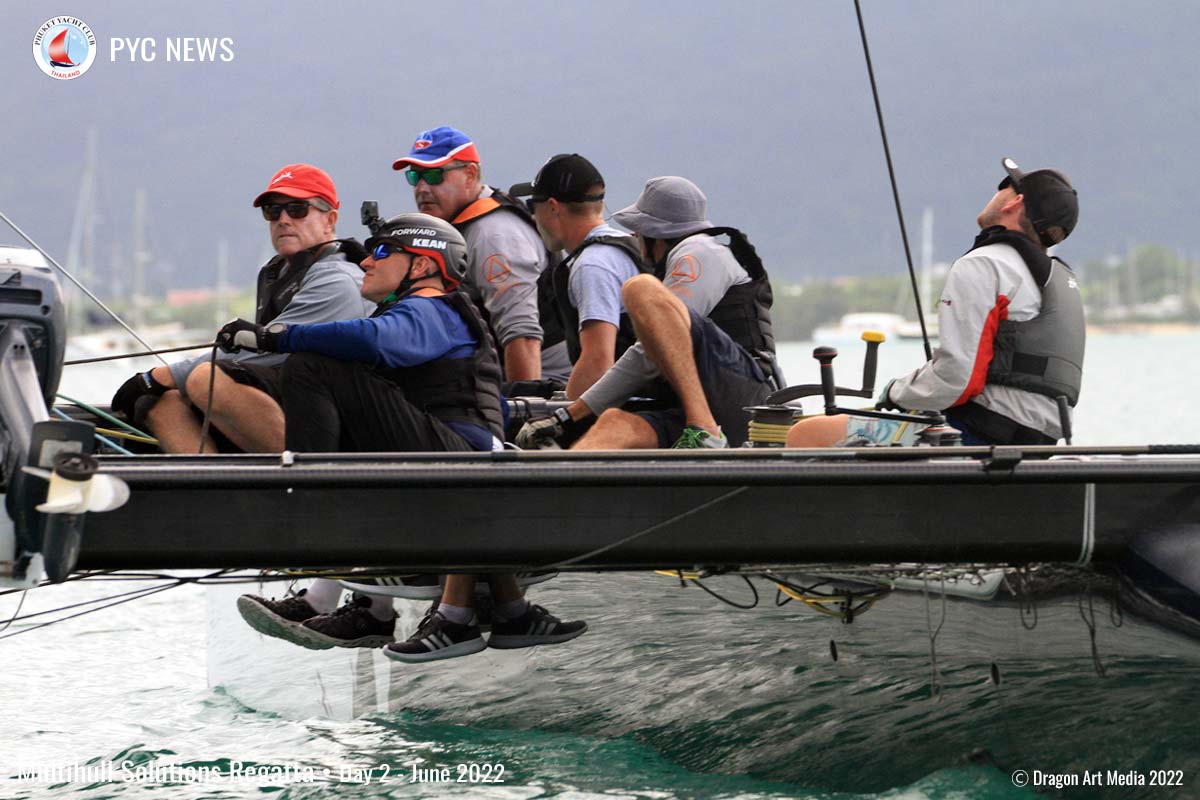 Still, the extreme 40 Parabellum continued to amaze, taking line honours again and winning its fourth straight race in the Multihull Racing class. The yacht resembles its namesake as it flies across the water like a bullet to the oohs and ahs of competitors and race officials alike.

Mick Coleman skippered John Coffin’s Fez to second in the Multihull Racing Class with Warwick Downes’ Bonza placing third and Glywn Rowlands’s Twister 2 coming fourth in the four-boat class. Parabellum (4 pts) holds a commanding lead going into the final day and Fez(8 pts) has a stranglehold on second spot, but Twister 2(14 pts) and Bonza (15 pts) will battle it out for third place. 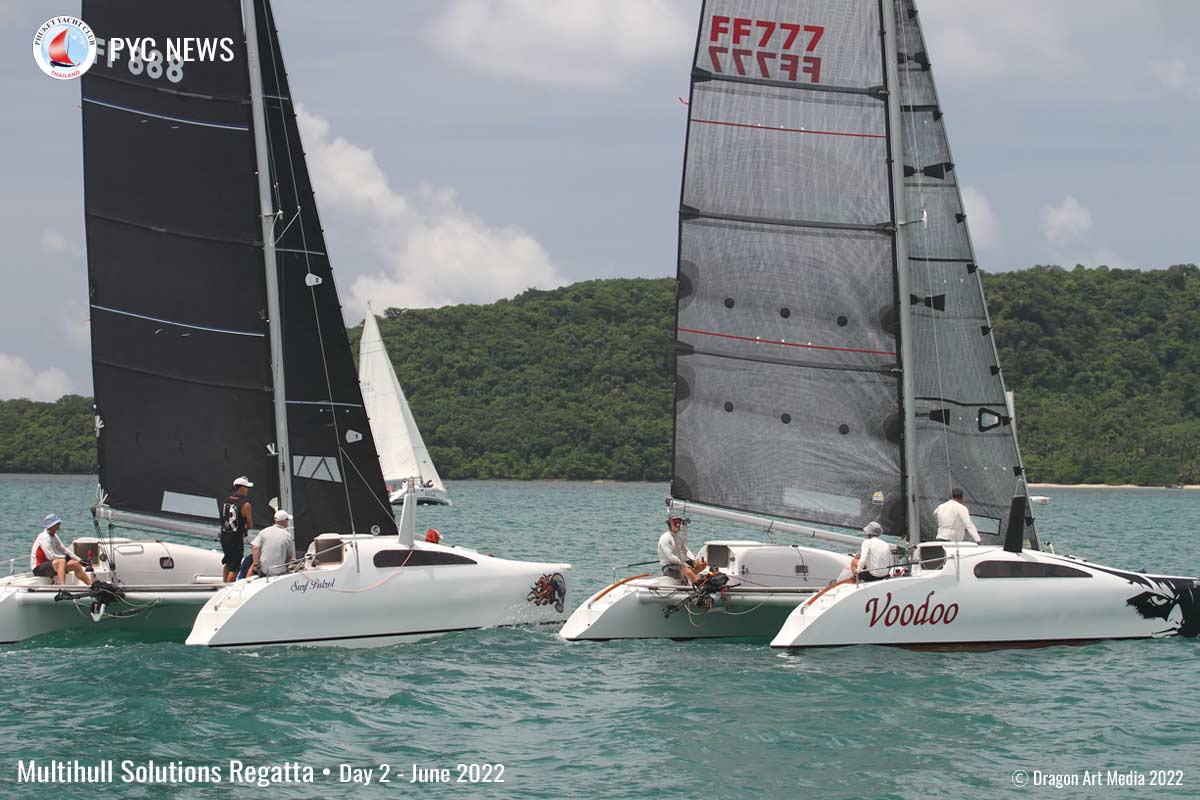 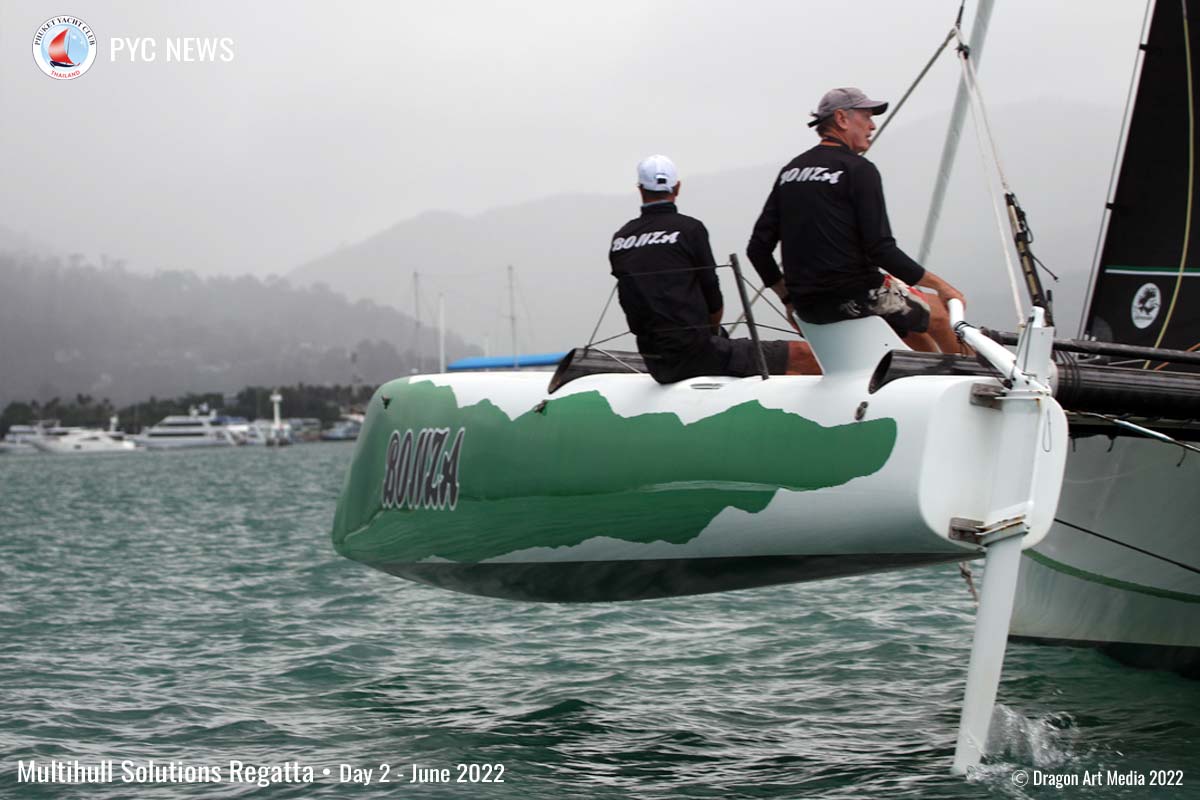 The five-boat “Combined Cruising” class saw Dane Niels Degenkolw win his fourth straight race on Phoenix, followed by Mike Downard’s Magic from Sail in Asia in second, Bill Kane’s The Sting in third, Paul Flatty Baker’s Mas Alegre of the Java Racing fleet in fourth with Peter Dyer’s Venture in fifth. Heading into the final day Phoenix has first wrapped up with four points, but The Sting(10 pts) and Magic(10.5 pts) are battling for second overall while Mas Alegre sits in fourth with 16 points and Venture has fifth spot with 19 points.

The Phuket Yacht Club deserves to be commended for not missing a beat during the COVID-19 pandemic. The club held its three regattas (Sailor’s, Multihull Solutions & Jai Dee) throughout the pandemic, adhering closing to health regulations and never cancelling one event.

The final day of racing goes tomorrow with a noon start time. There will be a buffet dinner and awards ceremony at the Phuket Yacht Club Sunday evening.

The event could not have happened without the generous sponsorship of Multihull Solutions. 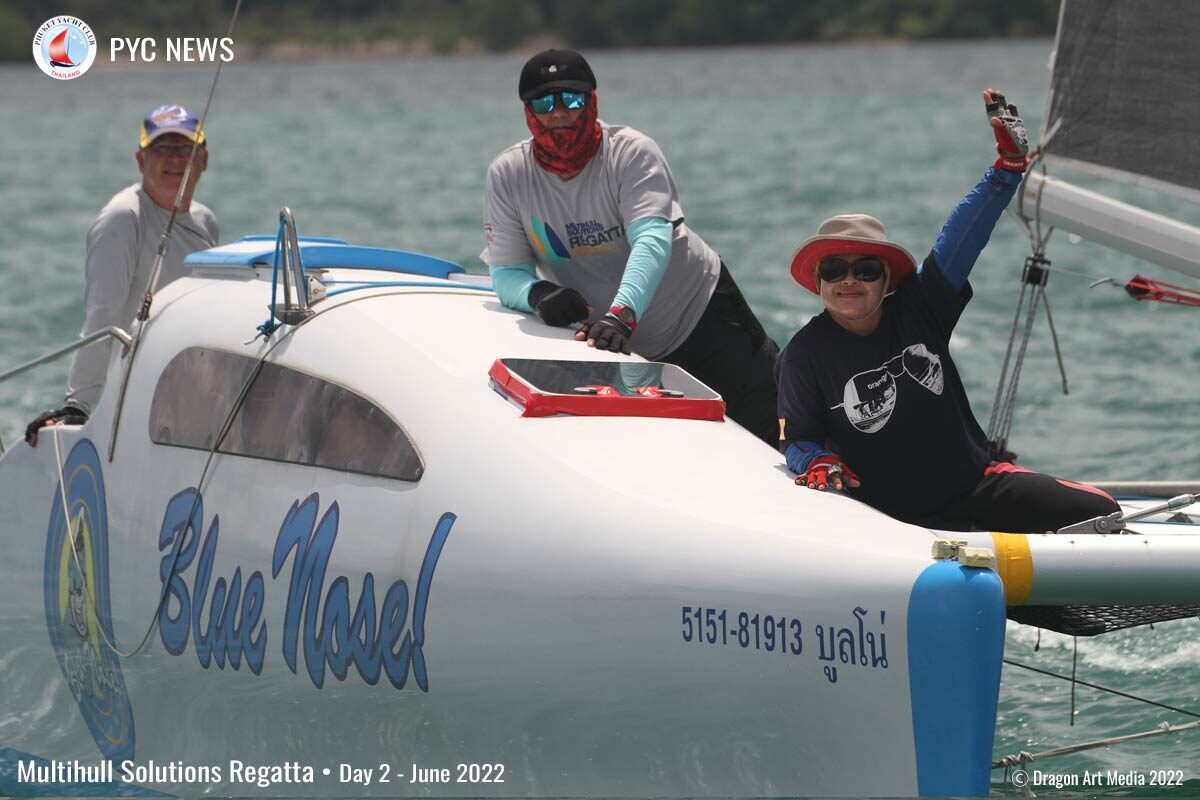 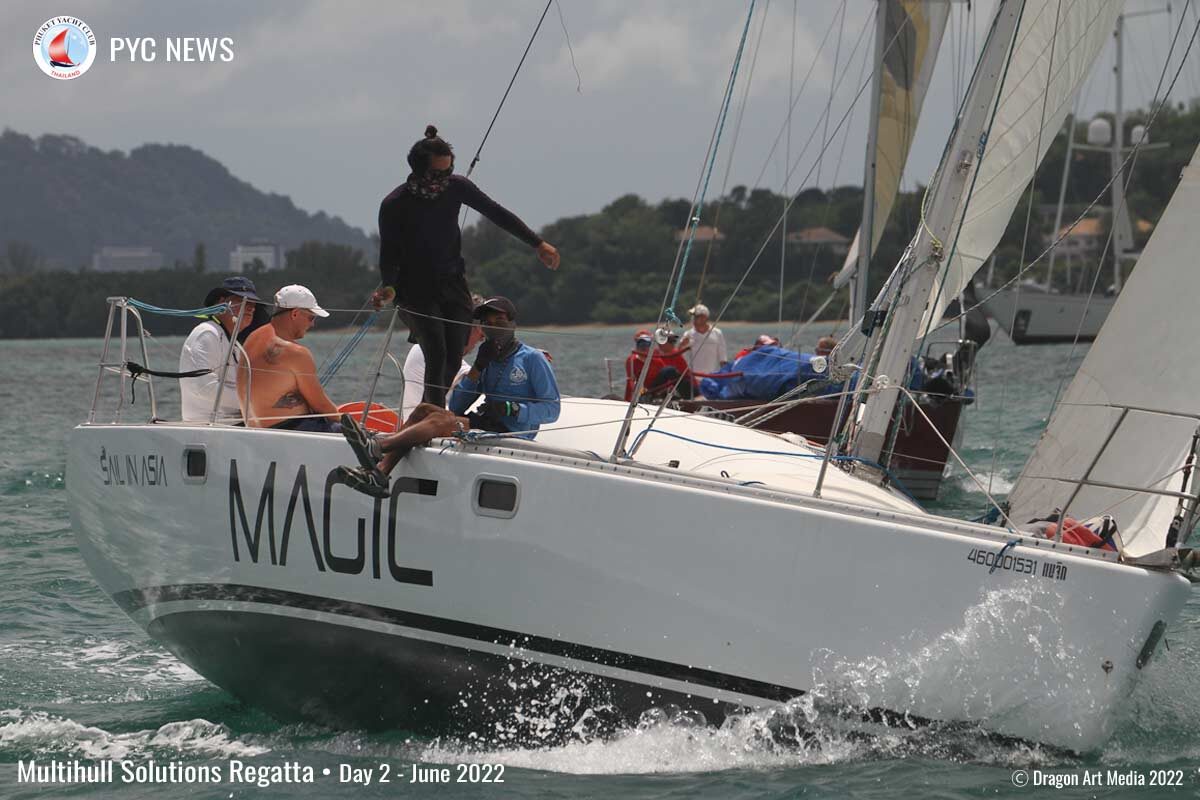 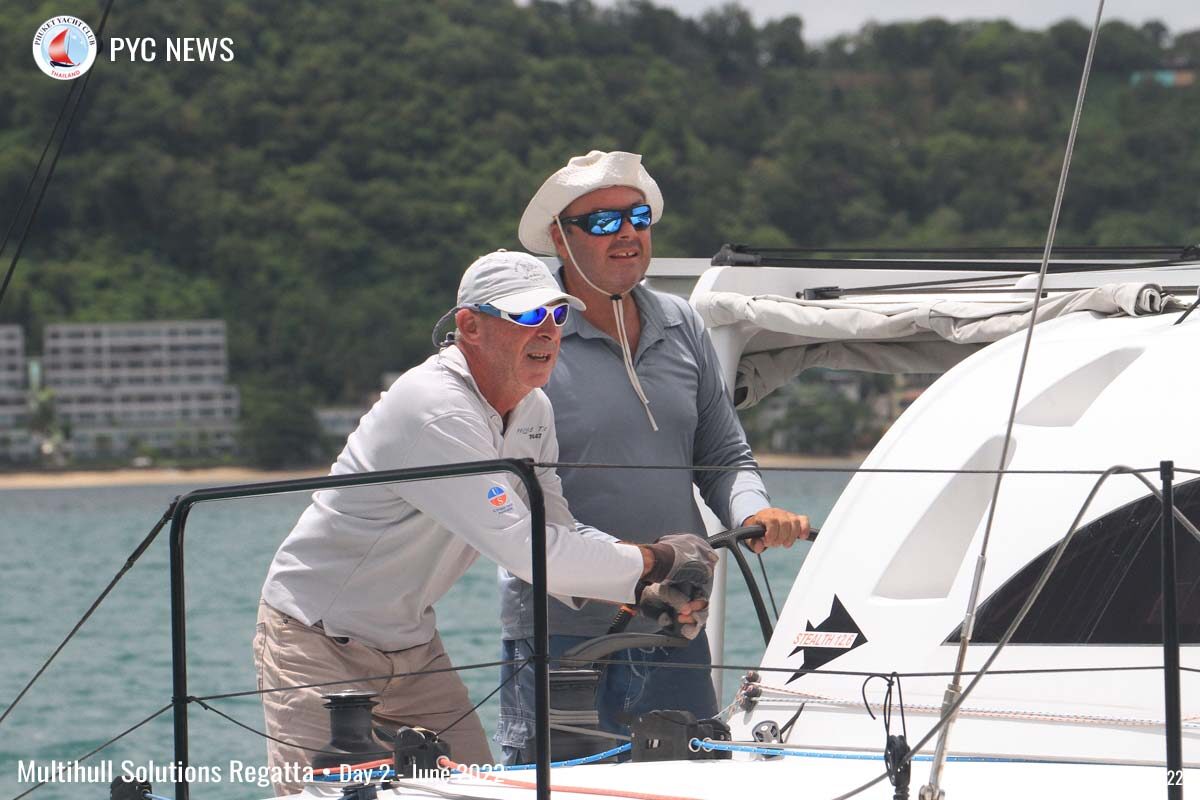 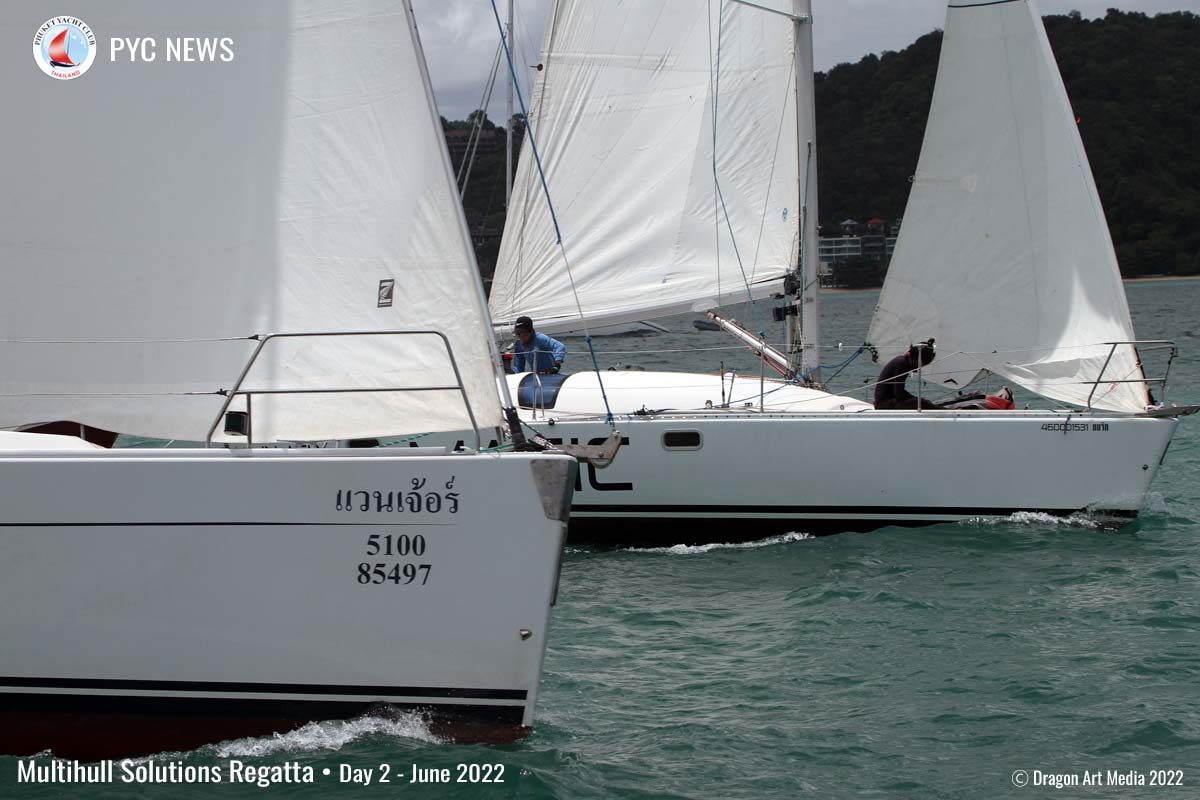 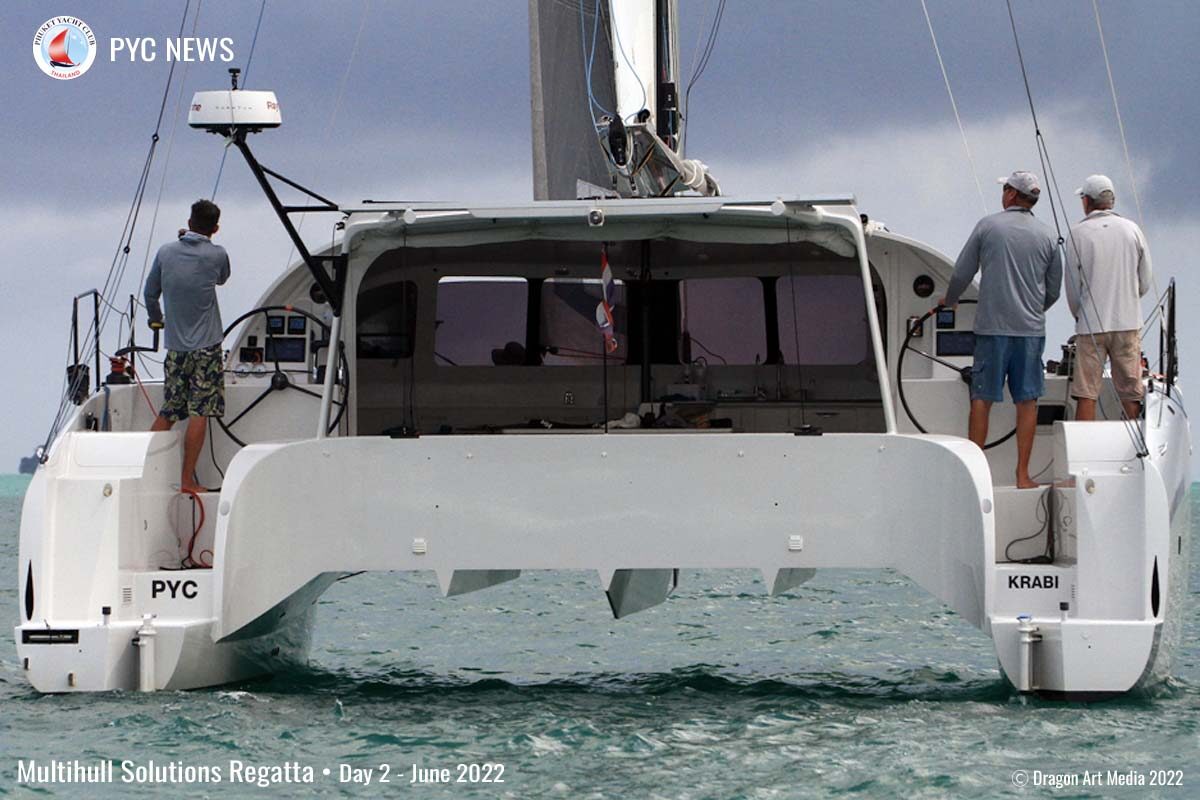 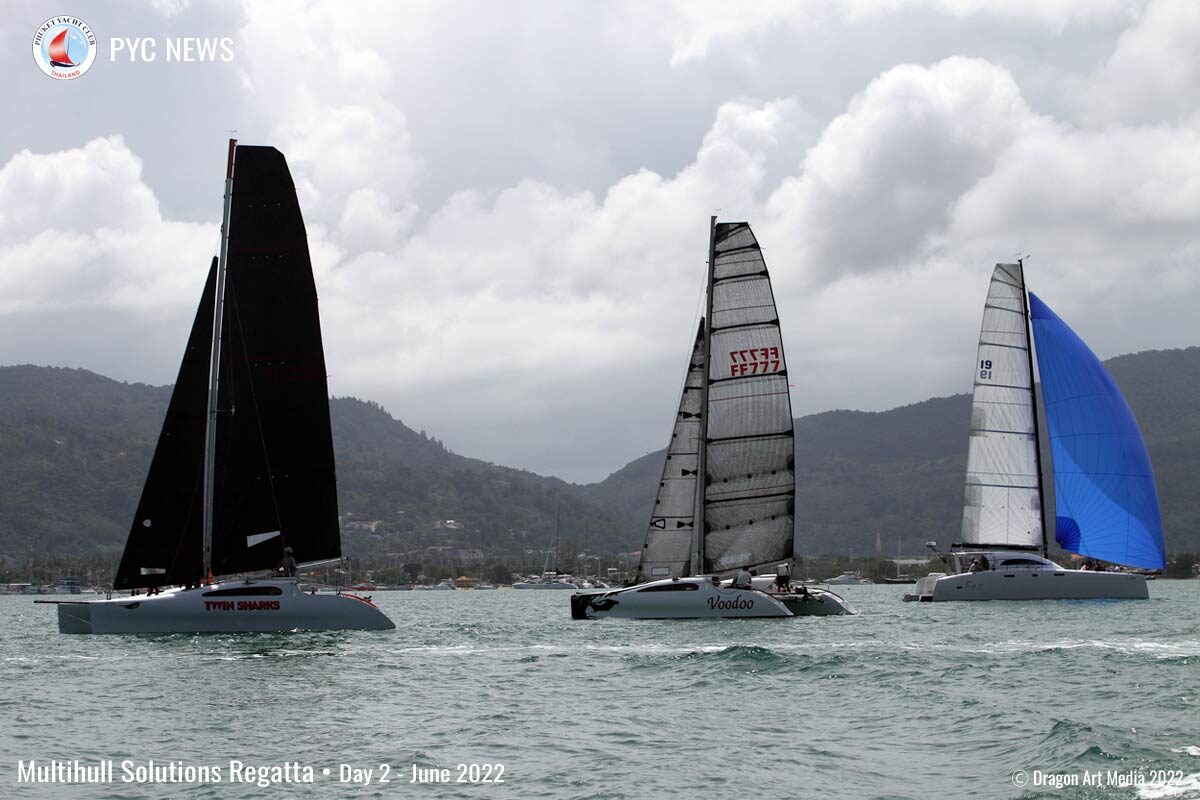 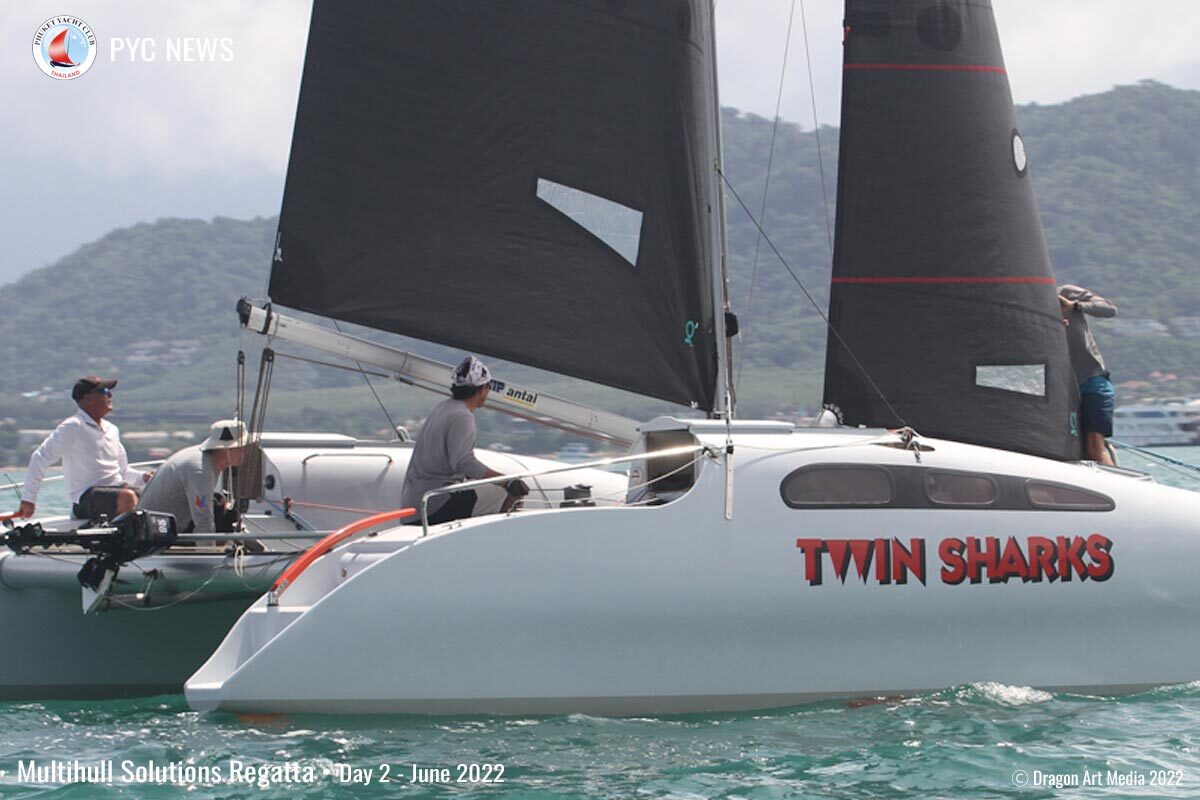 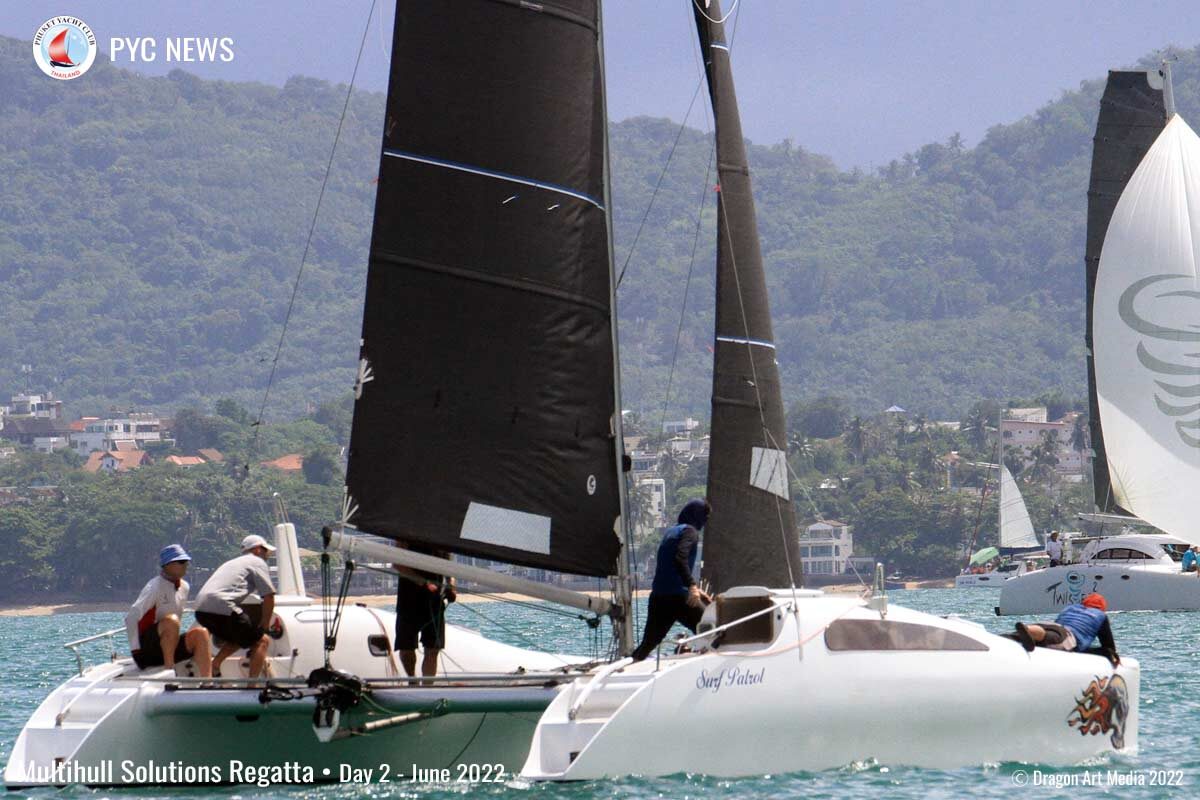 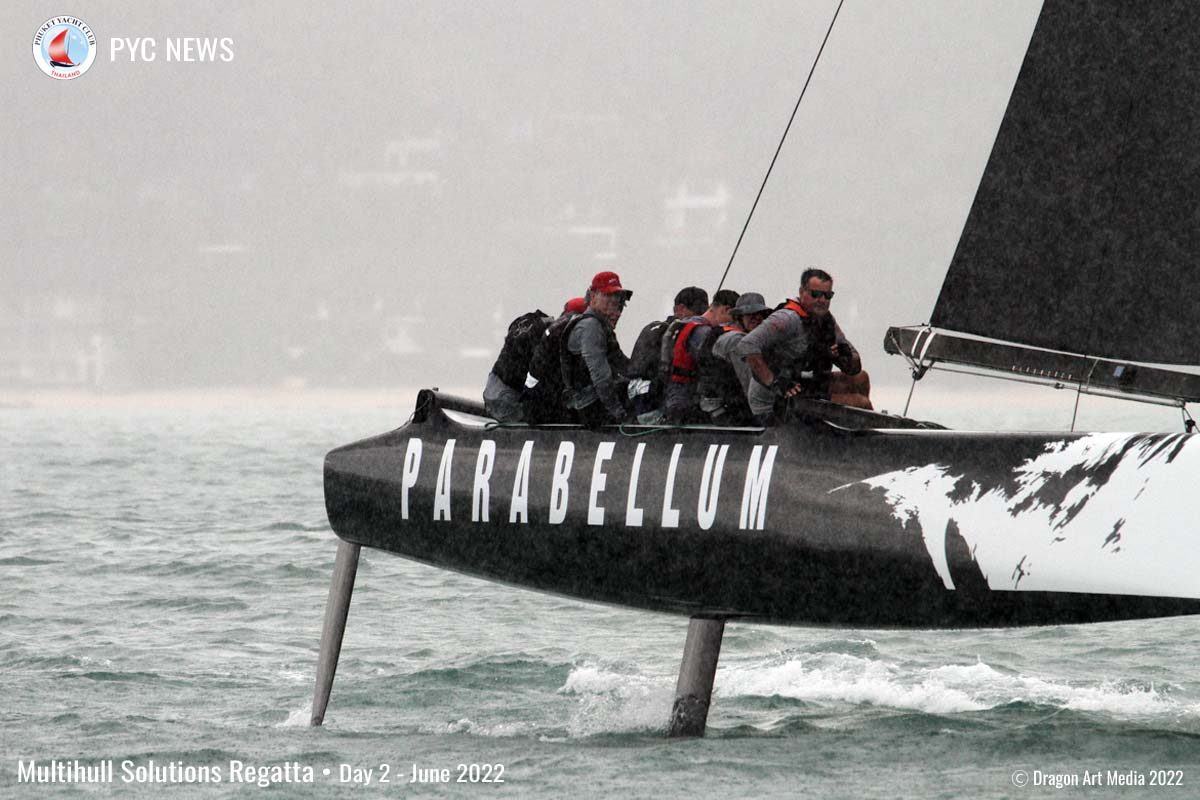