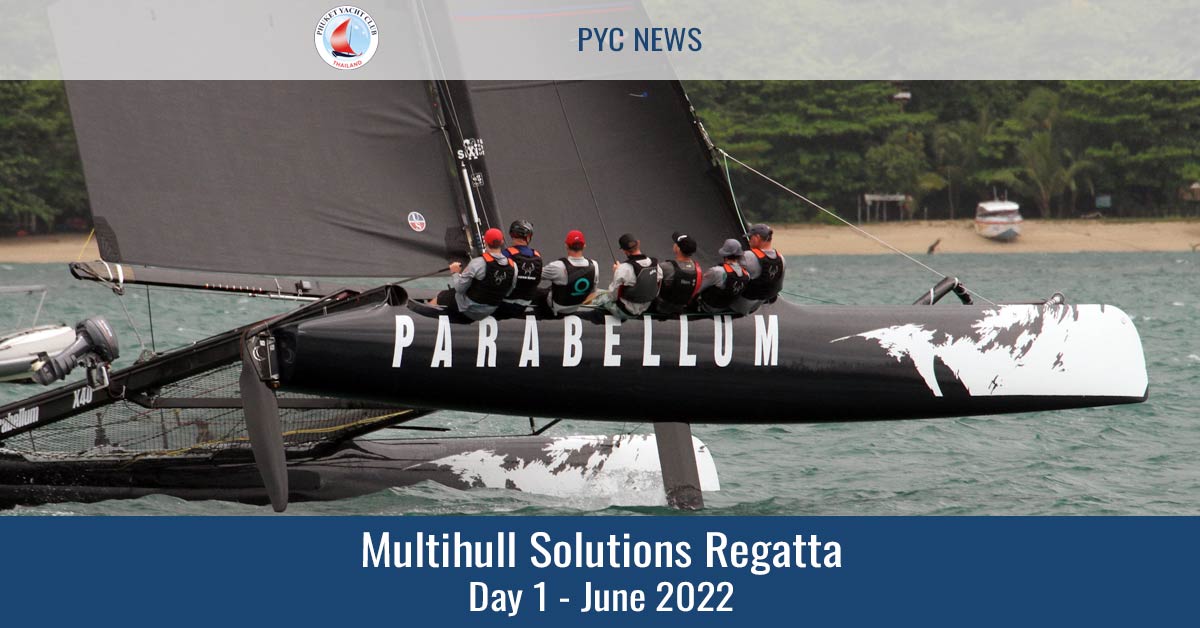 Parabellum doesn’t disappoint on day one of MSR 2022

On the first day of the Multihull Solutions regatta, the extreme 40 Parabellum made its Southeast Asian racing debut and it did not disappoint. The speedy yacht took line honours in every race winning each race along the way. Unfortunately, owner Dan Fidock was sidelined with a severe arm injury but skipper Joel Berg masterfully navigated the boat around the course, which included three of his Aussie mates as part of the seven-man crew.

Mick Coleman skippering John Coffin’s Fez placed second to Parabellum in all three races while Glywn Rowlands’s Twister 2 took two thirds and a fourth on the day in the four-boat “Racing Multihull” division. Last year’s regatta winner Bonza had a tough day losing a panel on its main sail and did not start the last race. 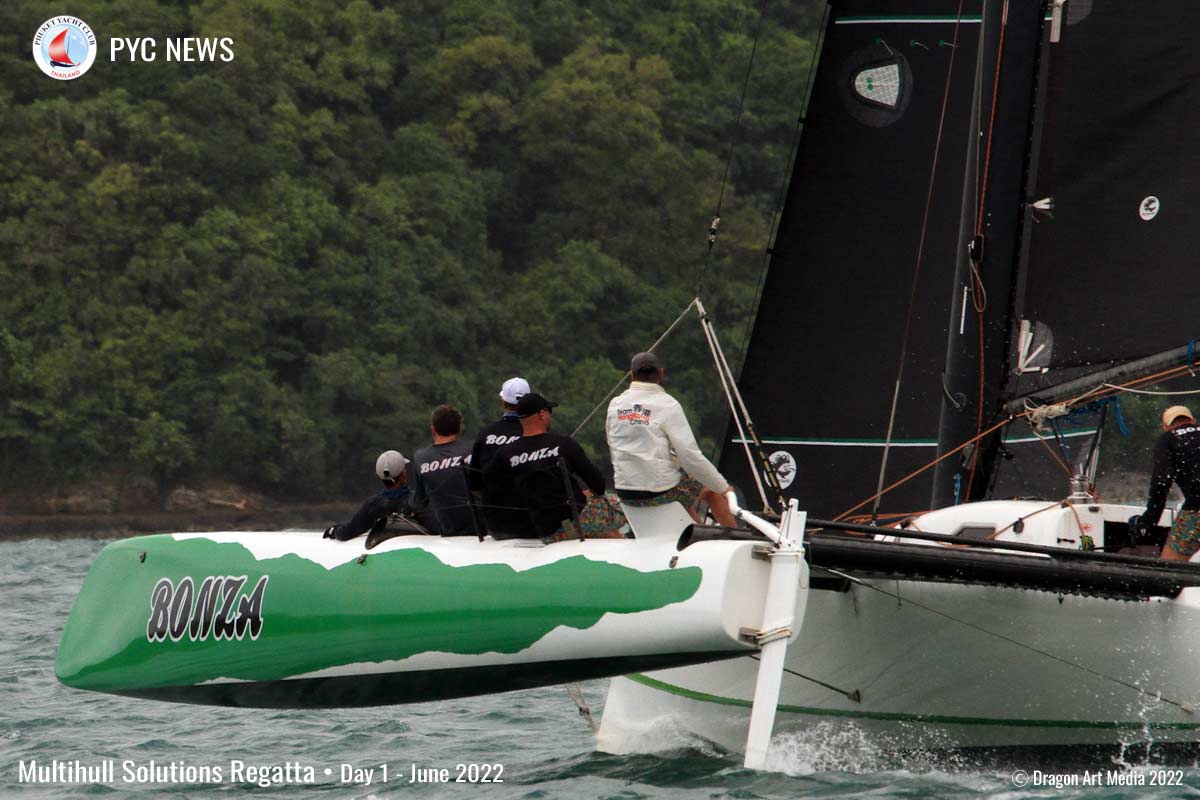 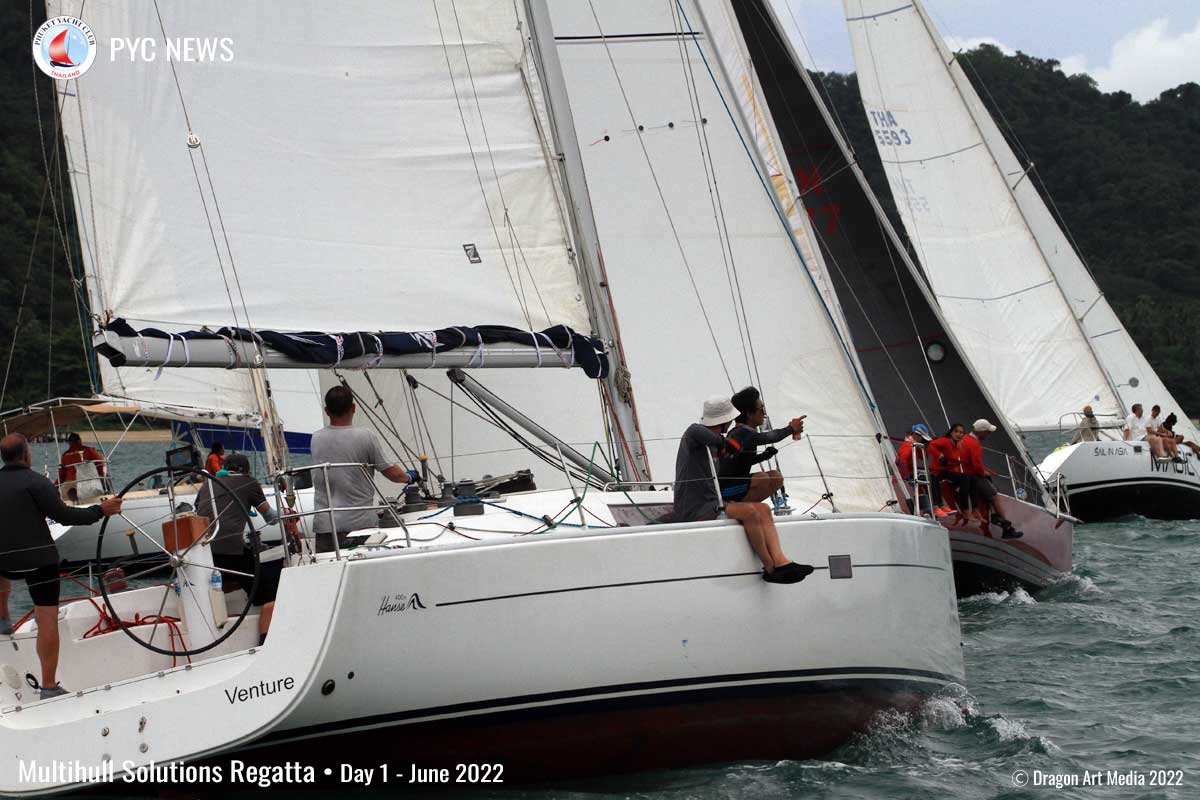 Racing was delayed an hour from the scheduled noon start time due to low wind and rain, but just before 1pm PRO Simon James got the fleet off and he was able to fit in three races for all classes before the 4:30pm cut-off time.

For the first race, PRO James had three separate starts but for the last two races be started the multihulls together.

John Newnham’s Twin Sharks won the first two races in the “Firefly 850 Sport” class but had to settle for second in the third race as Ray Waldron’s Surf Patrol flew across the water to capture that race. Ian Coulson guiding Hans Rahmann’s Voodoo took second overall on the day with two seconds and a third; Surf Patrol finished third and George Eddings Blue Noze came last in the four-boat Firefly class. The Fireflies have a special place in the hearts of many Phuketians as they were designed and built here by Mark Pescott and the late Mark Horwood, respectively.

The five-boat “Combined Cruising” saw Dane Niels Degenkolw do what he does best – win, as Phoenix captured all three races on the day, followed on point scores by Bill Kane’s The Sting, Mike Downard’s Magic from Sail in Asia, Paul Flatty Baker’s Mas Alegre of the Java Racing fleet and Peter Dyer’s Venture. 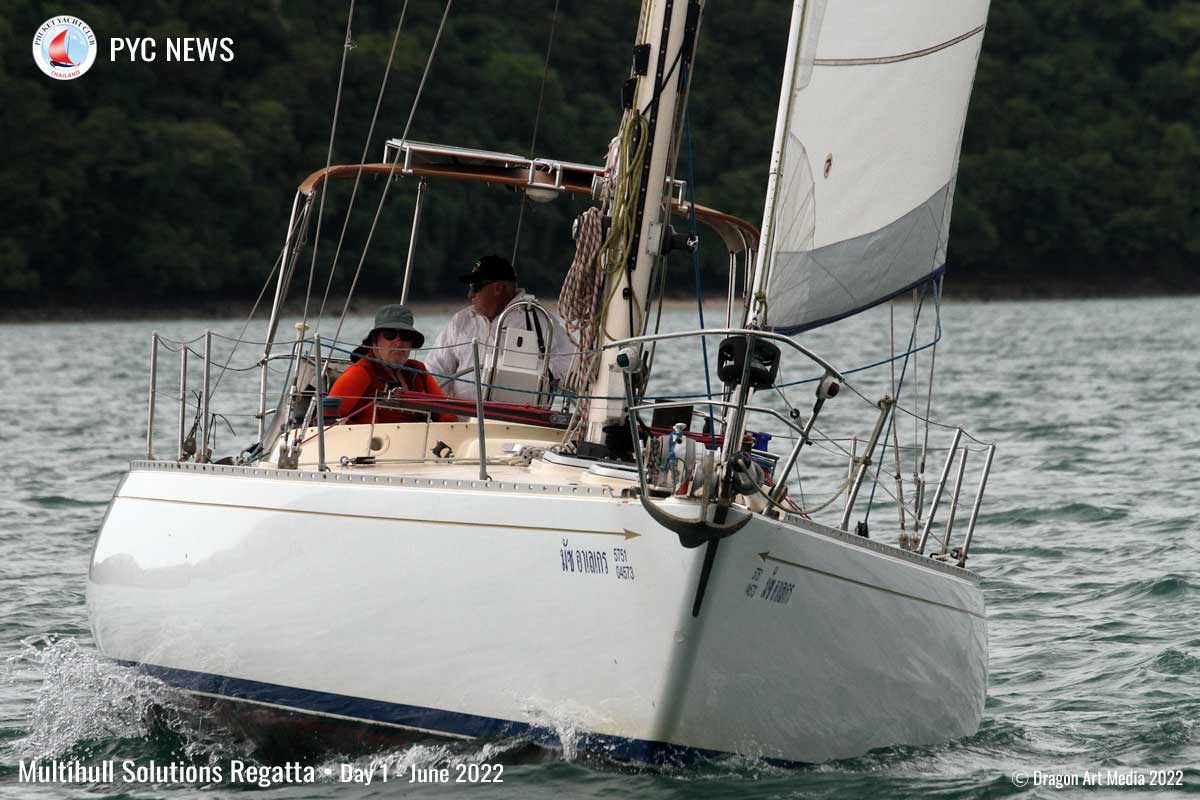 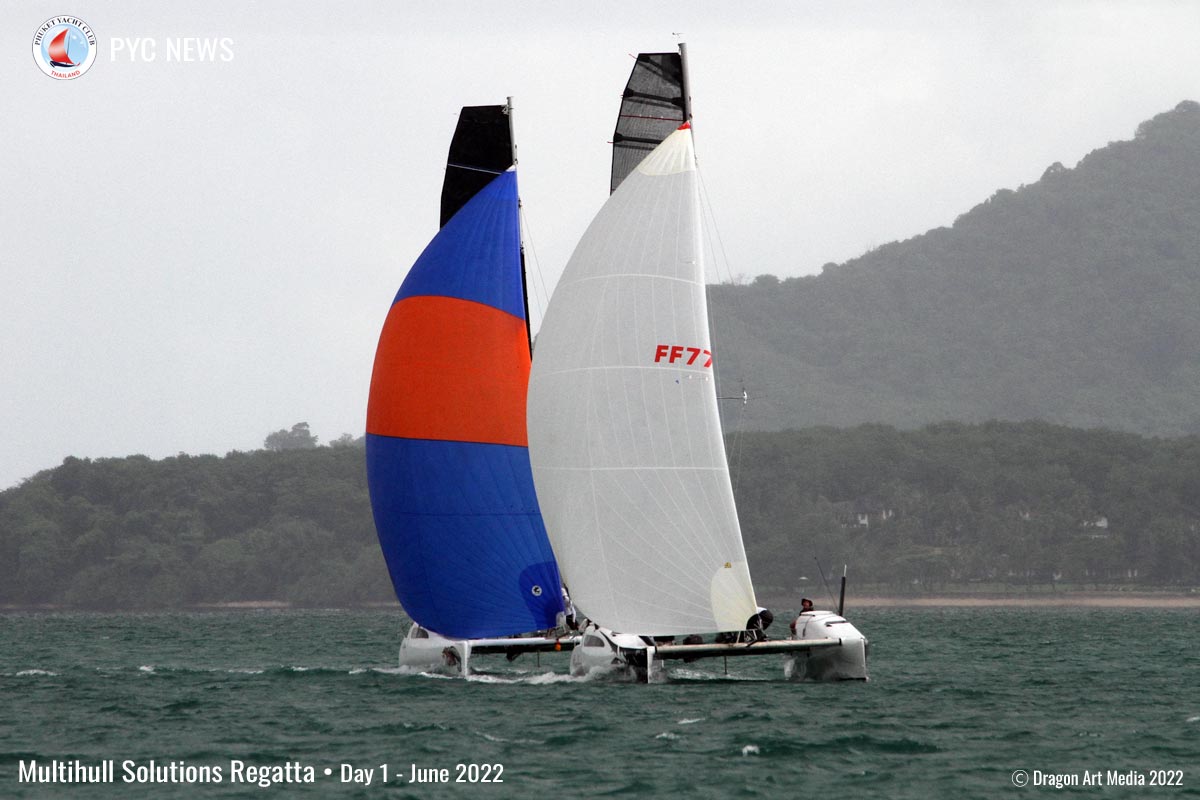 This is the tenth regatta where Multihull Solutions has been the title sponsor as they started their sponsorship of the event back in 2013. The winners of the previous regattas are as follows:

Richard Klein of Multihull Solutions and was on hand at the skipper’s briefing to officially start the regatta. The event started life as a regatta just for multihulls but as Multihull Solutions now runs The Yacht Sales Co, selling used monohulls, it made sense to include them in the regatta and there are four of racing in the Combined Cruising Class with The Sting being the only multi in that division.

PYC Commodore Peter Dyer graciously provided Aiolos as the start boat and he is sailing in the regatta on Venture while former commodores Scott Duncanson (Parabellum) and Mick Kealy (Bonza) are also competing in the event.
Racing continues on Saturday and Sunday with scheduled noon start times.

There will be a buffet dinner and awards ceremony at the Phuket Yacht Club Sunday evening. 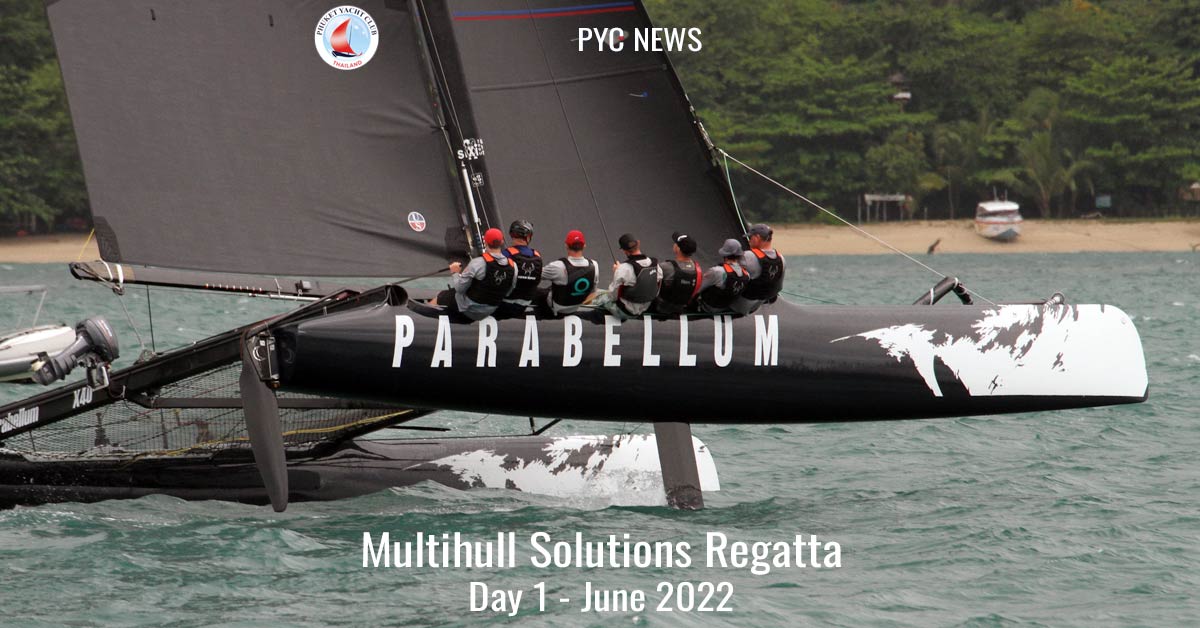 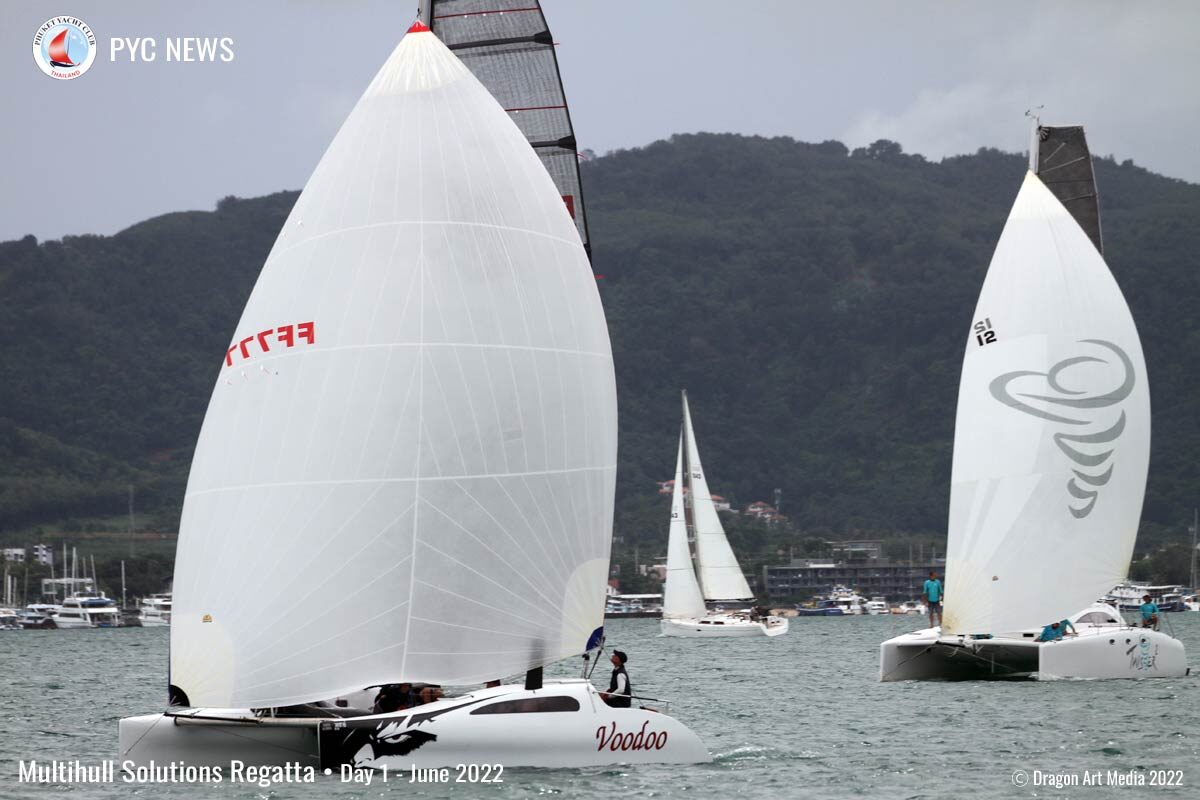 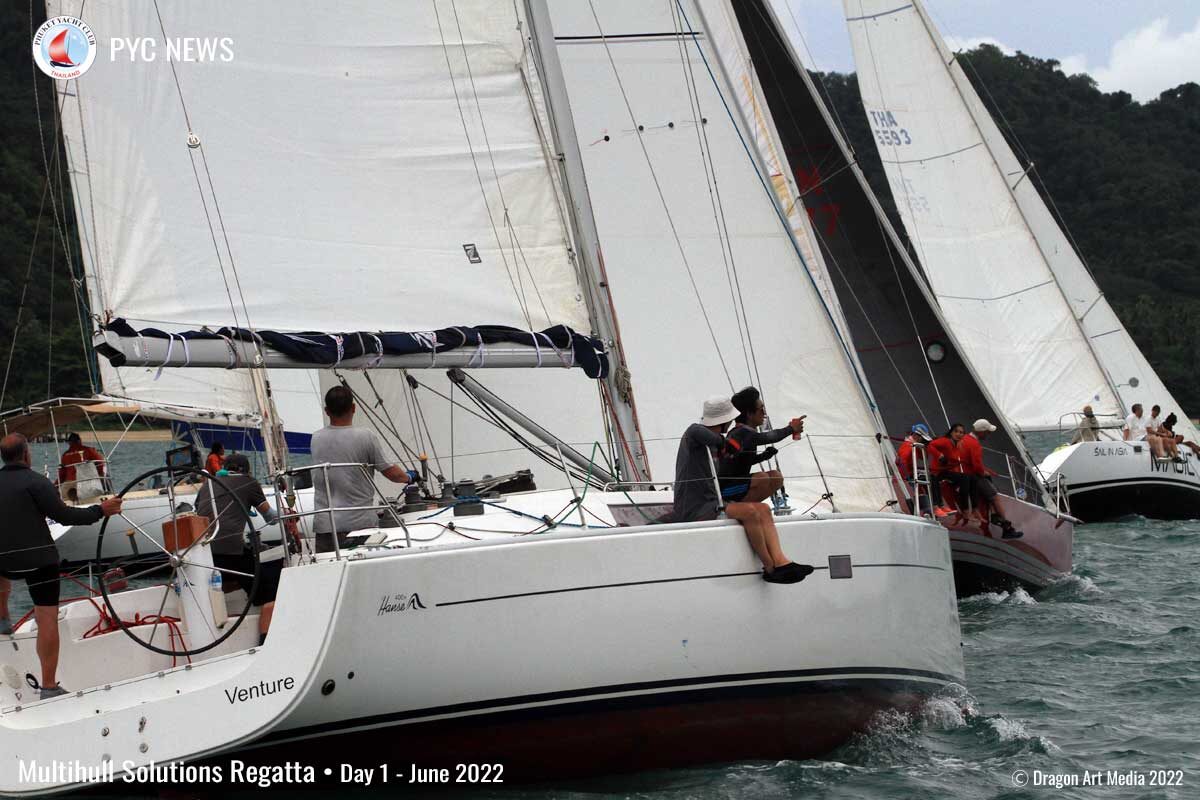 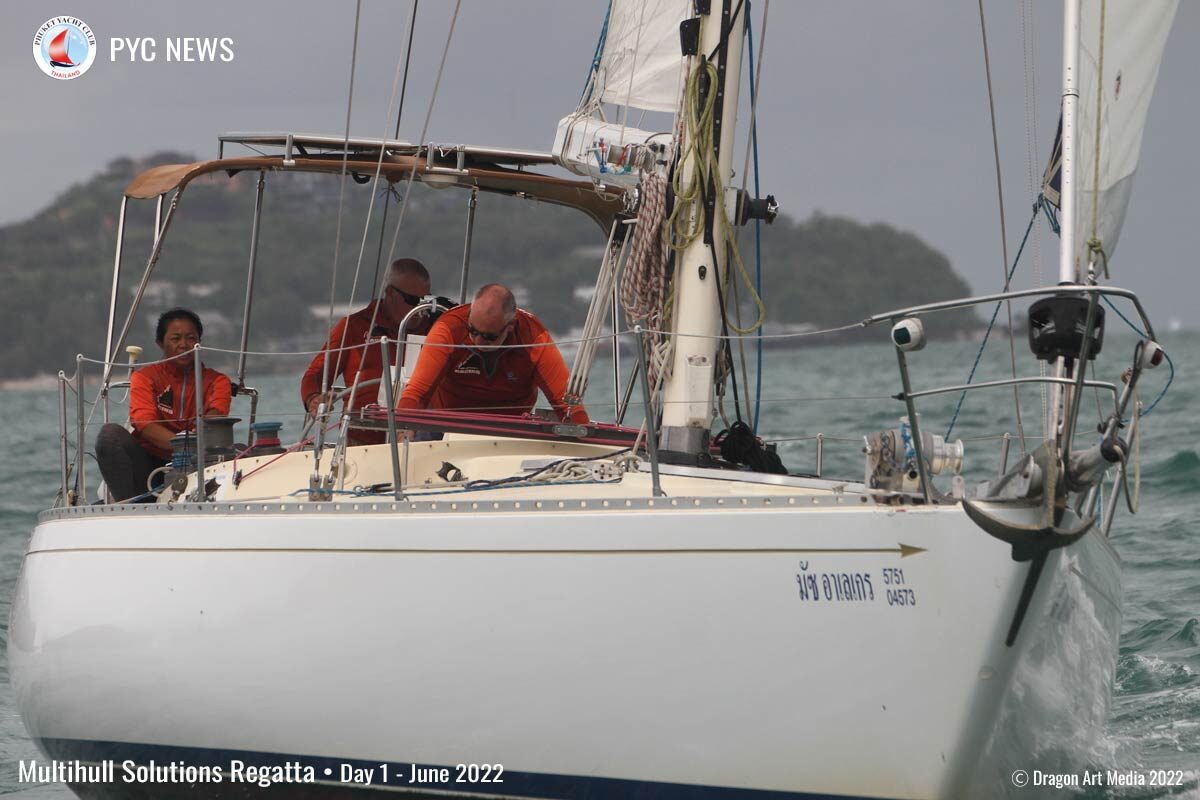 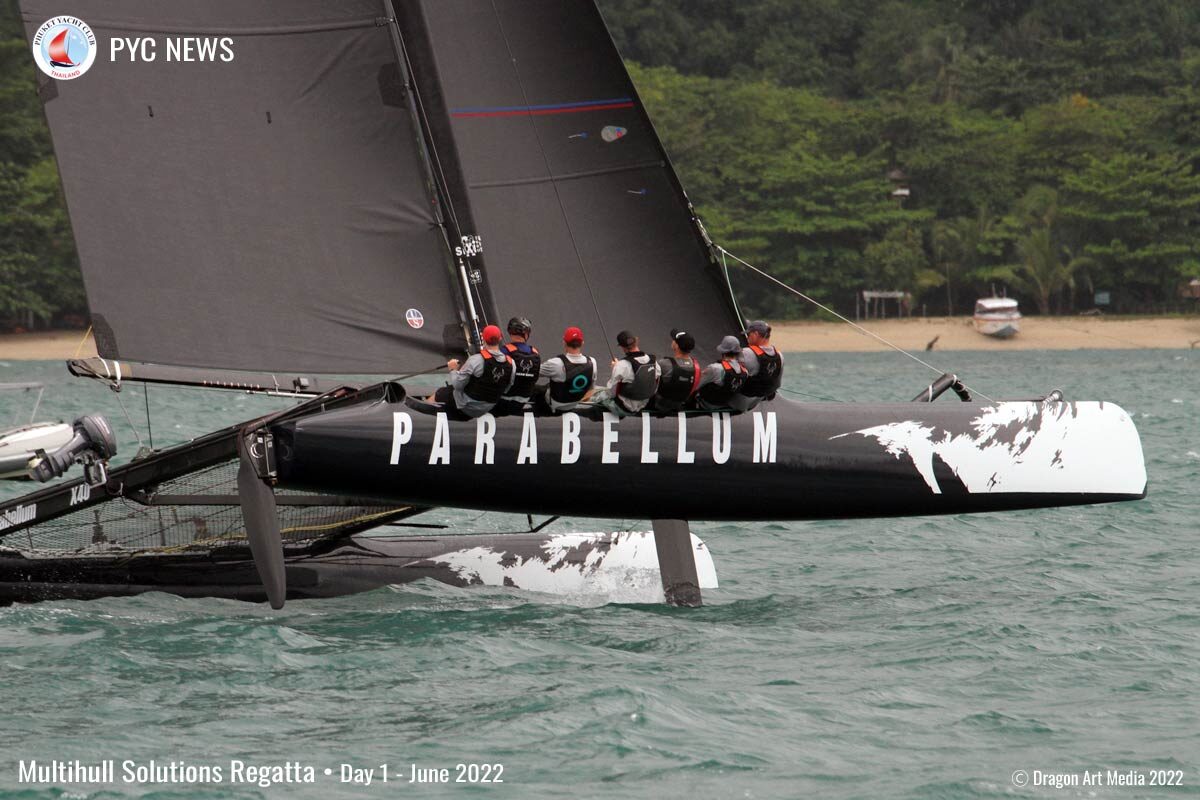 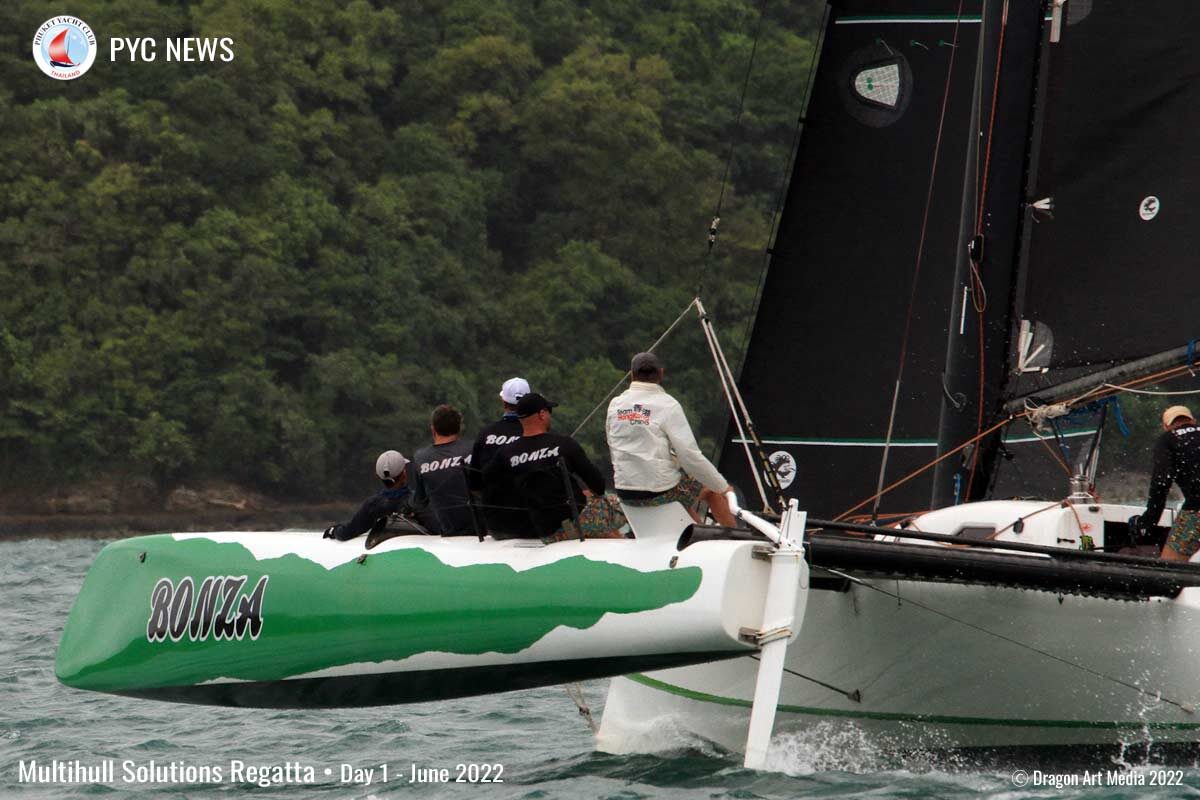 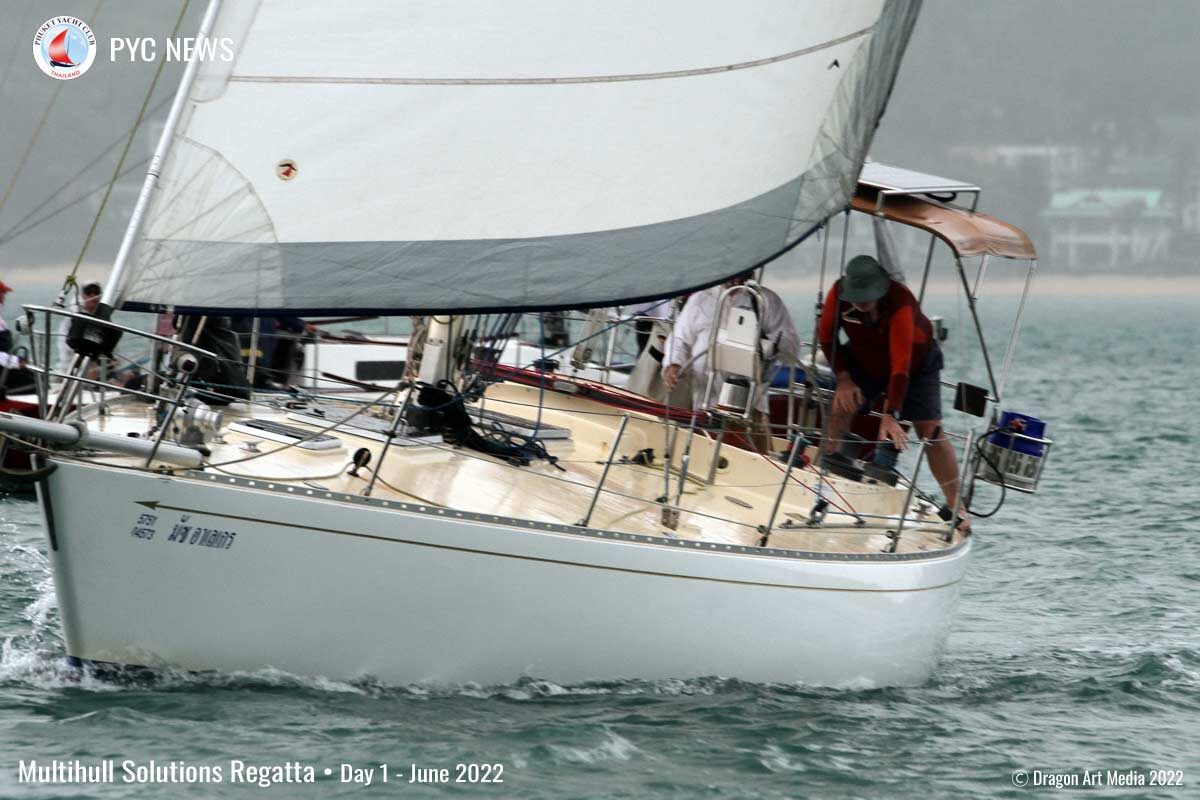 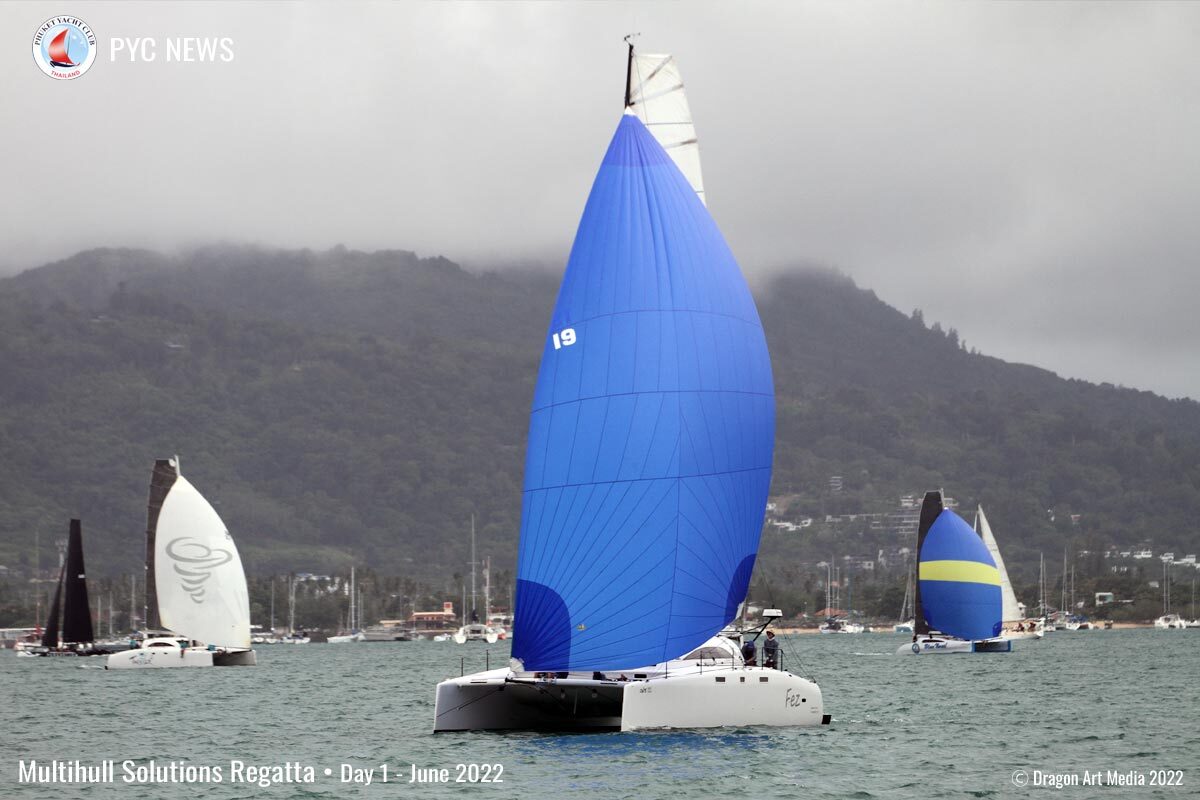 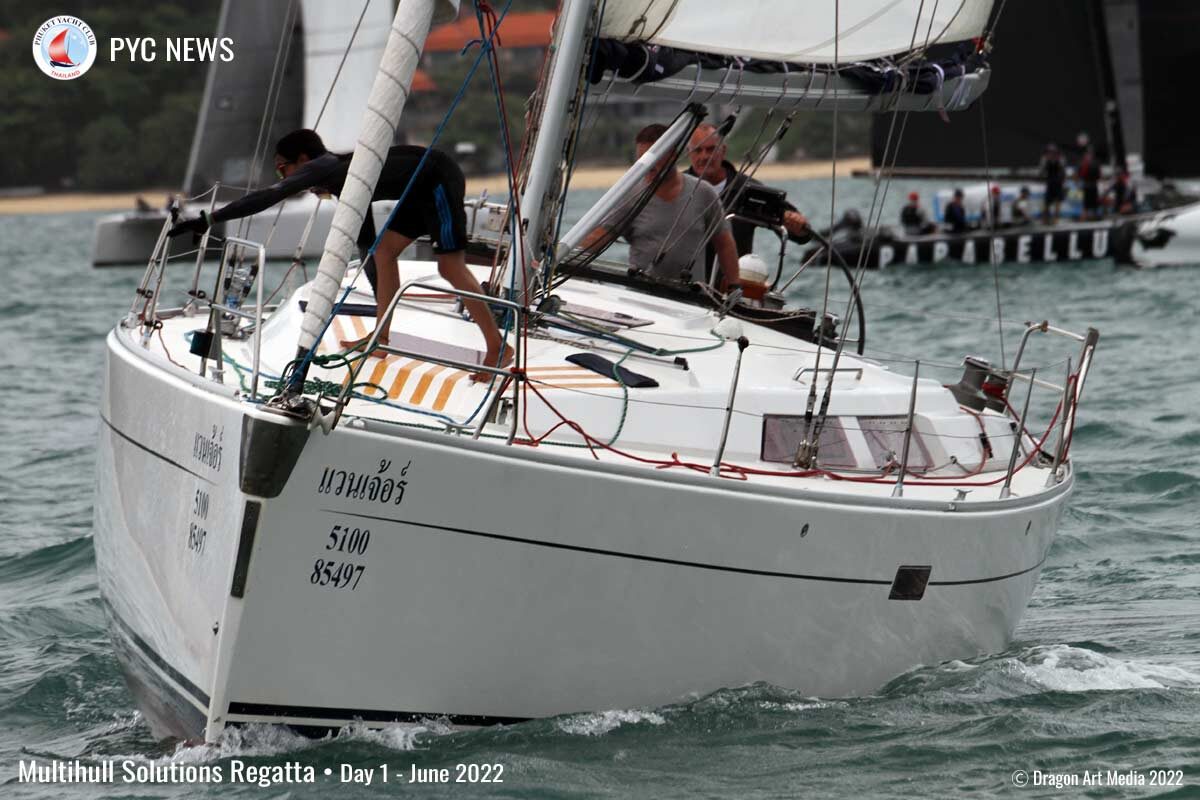 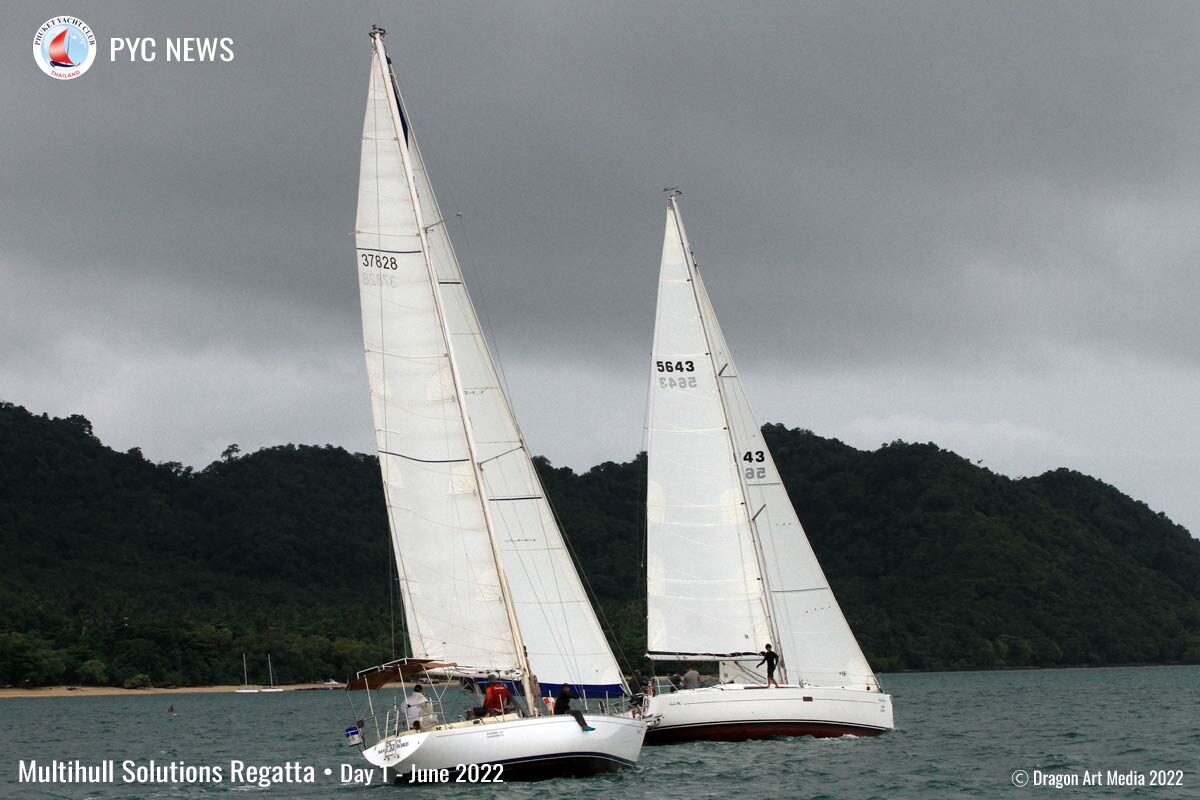 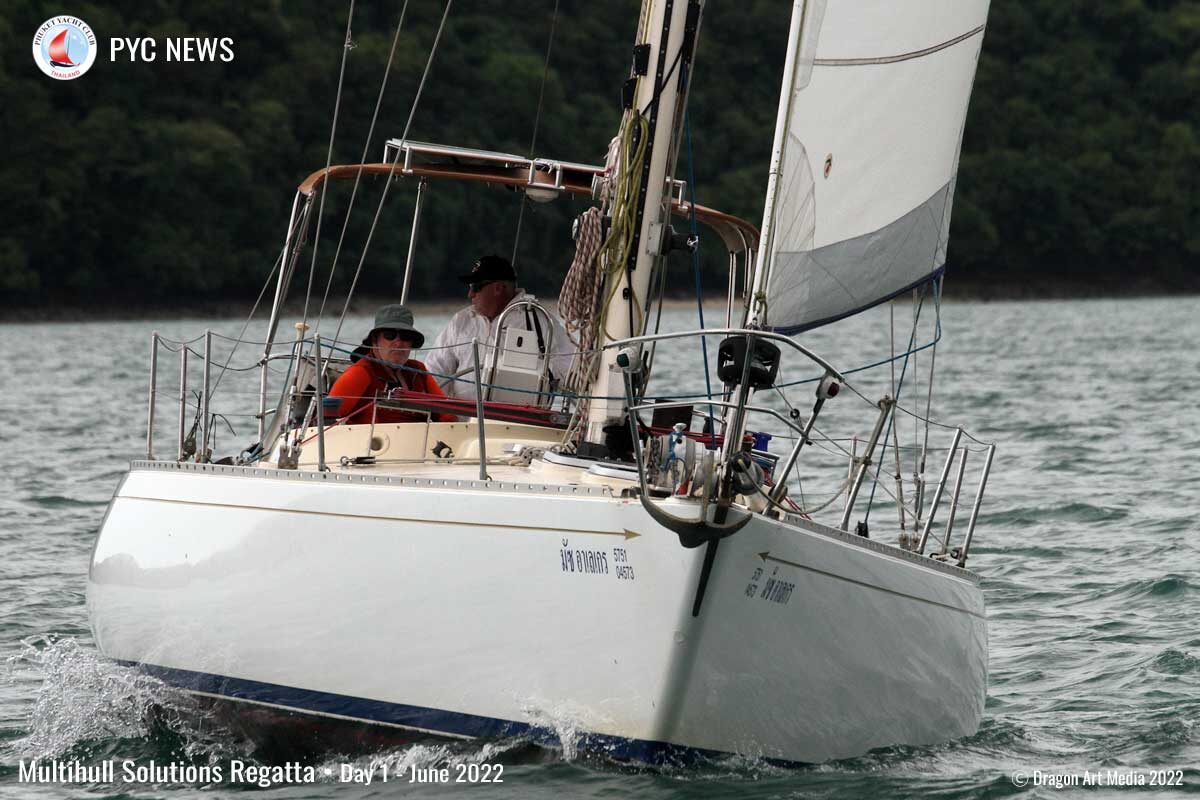 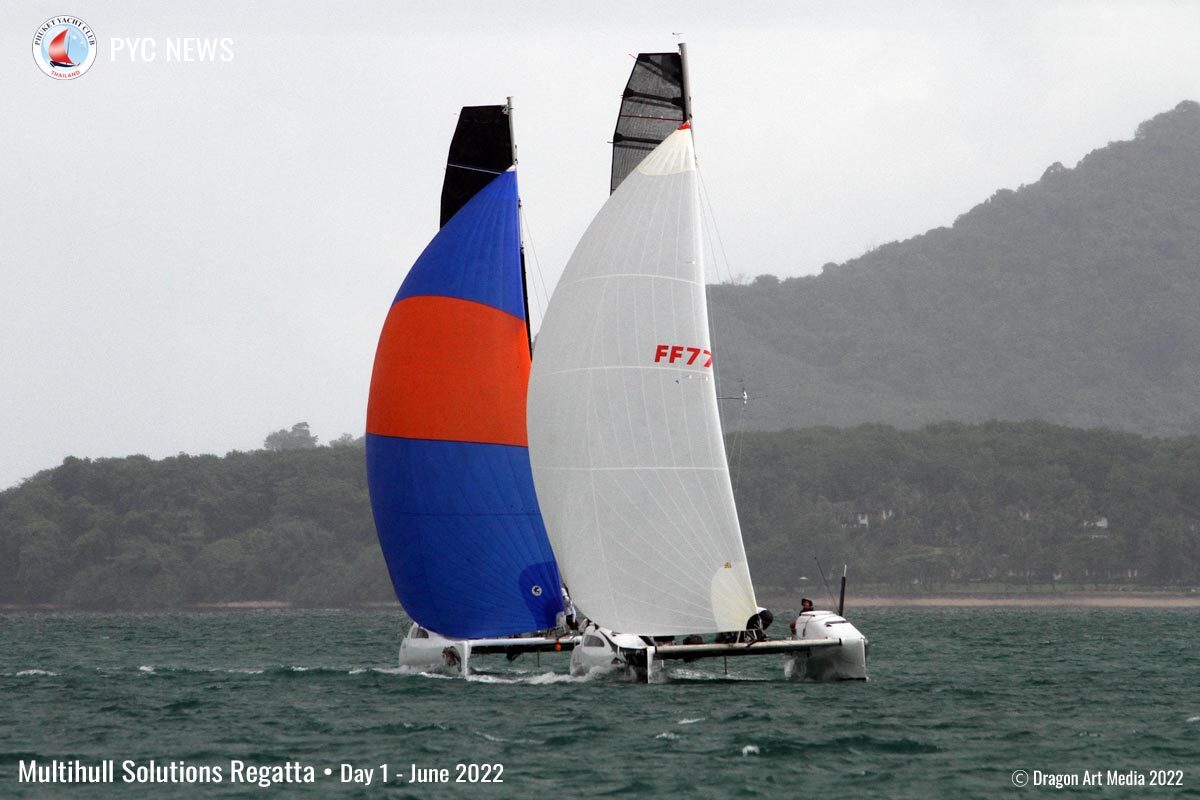 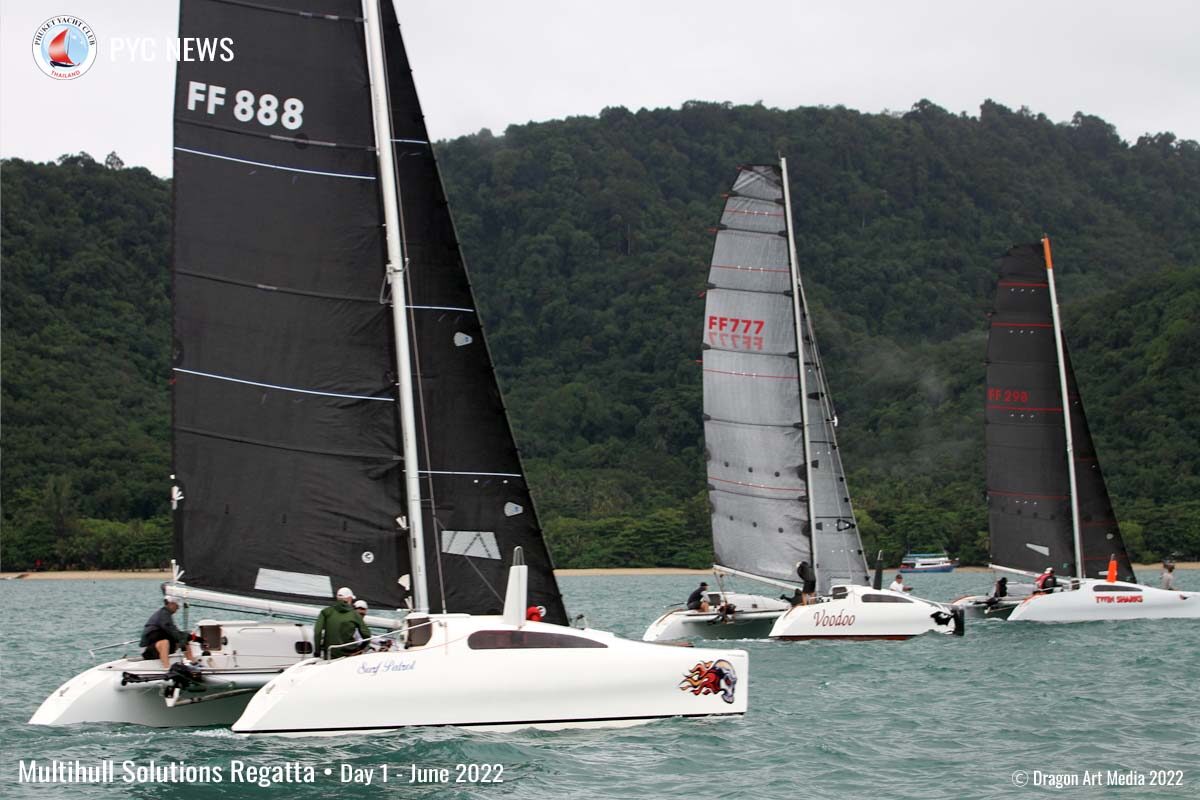 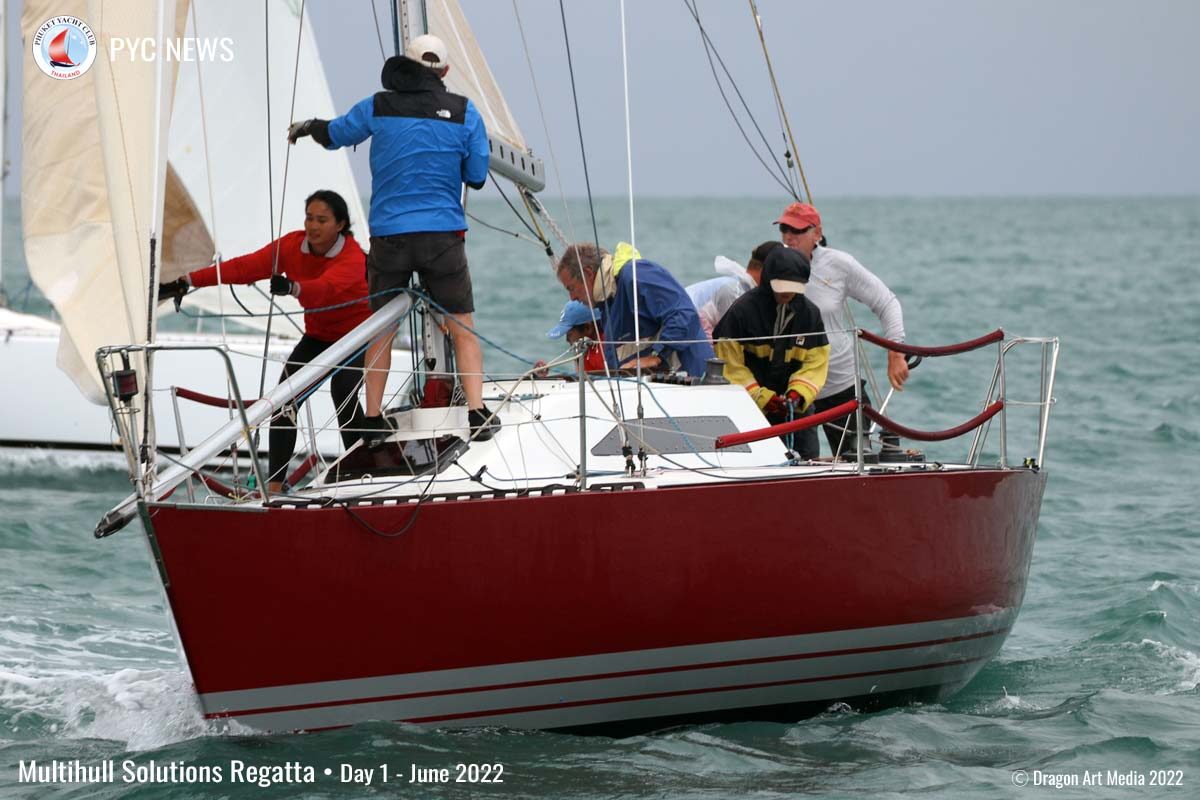