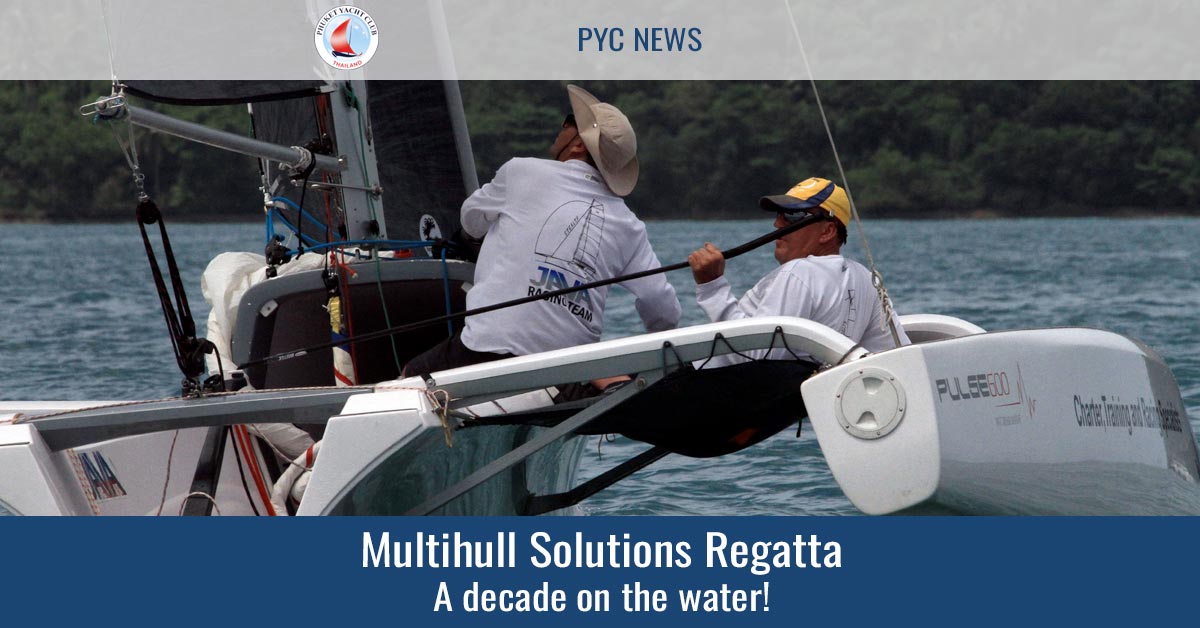 Multihull Solutions Regatta marks a decade on the water

The size and spaciousness found onboard multihull yachts, makes them the number one choice for cruising through the tropical Southeast Asian archipelago. Many foreign boat designers and composite builders have made Phuket their home and are manufacturing a range of boats there and in neighbouring SE Asian countries. As the industry growth has been phenomenal, Multihull Solutions have opened dedicated brokerages in Asia and sold some sleek one-design racing machines, that have increased the fleet size and raised the profile of the event.

With the all “all races to count” over three days of racing, crews needed to be on their best form from the beginning, as they couldn’t afford to make any mistakes or have a bad day, as they would suffer the consequences.
Six locally built Firefly 850 Sports cats, designed by Aussie Mark Pescott have been the backbone of one design racing in Phuket and always provide a great spectacle. John Newnham's Twin Sharks has proven unbeatable over the last couple of years and once again, was pitted against previous champions Hans Rahmann's Voodoo— the two usually end up dueling it out till the last race. Ray Waldron's Surf Patrol was the new kid on the block, while Jonathan Kingdon took over the reins on Moto Inzi from his father. George Eddings returned on Blue Nose and Natsuki Motoyoshi's Japanese team on Mil Grace rounded out the class.

With the introduction of the one-design Pulse 600 class, made by Corsair Marine in Vietnam, they have become an extension of the vibrant “Fly In, Fly Out” charter scene at Phuket regattas. Owned by Java Yachting and used for match racing in Krabi, these nippy trimarans have attracted several two-person teams from overseas, to take on Andrew de Bruin's H30 Multihull Solutions.

Asia general manager and title sponsor, Multihull Solutions, Andrew de Bruin summed up the regatta best: "Three days sailing around Chalong Bay in strong breeze, with a bunch of like-minded people, gathering at the Phuket Yacht Club bar afterwards, to regale each other with tall tales of their exploits, over a few cold beers – what more could you want?". 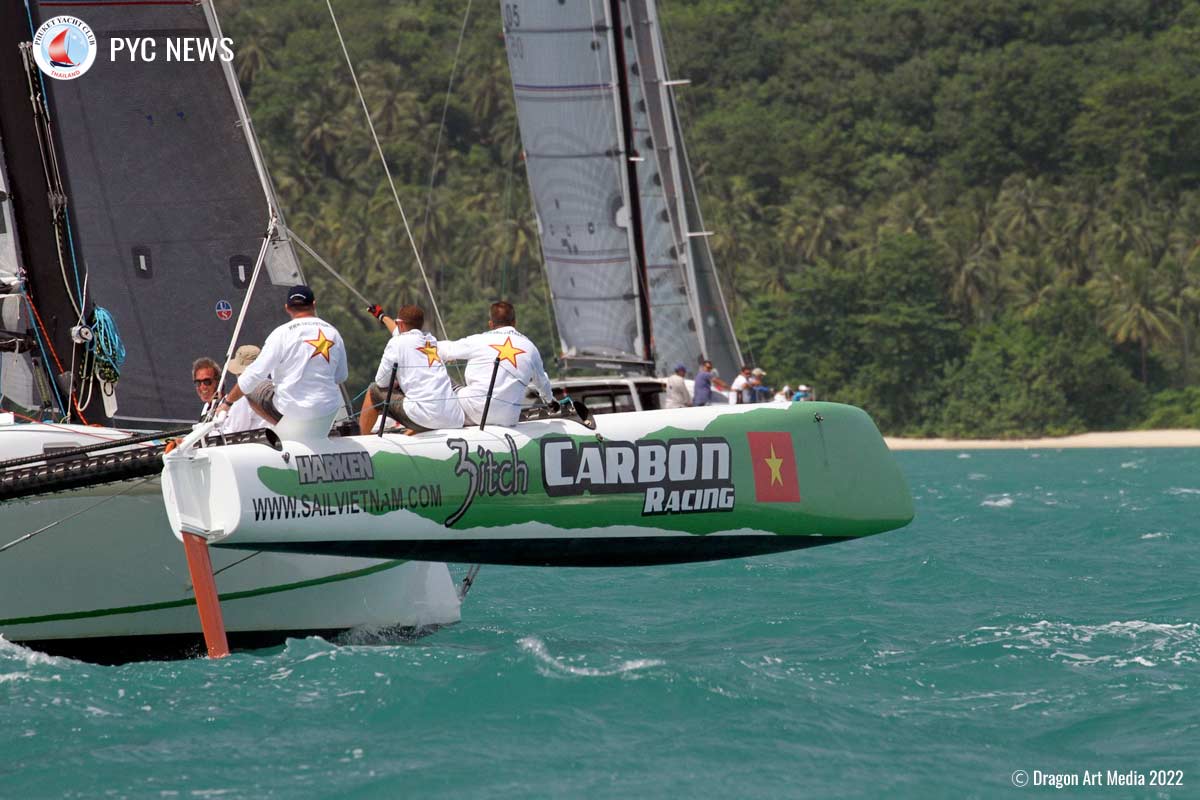 This is a perfect feeder event for crews to hone their skills before the action packed Cape Panwa Hotel Phuket Raceweek (July 19th - 23rd) to be contested on the very same waters, the following week.

The strong wind warning issued by the Phuket Weather Bureau proved to be correct and produced plenty of exciting moments, equipment failure and a spectacular nose dive (Surf Patrol), followed by a capsize. The saving grace was, that there were no rain squalls, normally associated with the blustery SW monsoon. Each day produced some carnage and after the second windward/leeward on the second day, the fleet was drastically reduced.

On the last day, the remaining yachts approached the start line with trepidation, as the SW'ly gusts were over 20 knots. Flying the hull or hulls became the order of the day and if you weren't “driving like you stole it”, you sat at the back of the fleet. As the breeze increased to 25 knots before the second race, the Fireflies and Pulse 600s decided to call it a day, while three Stealth cats braved it out., as the others returned to the comfort of the Phuket Yacht Club and wisely choose to preserve their rides for Phuket Raceweek.

Remarkably at 80 years young, Henry Kaye is still racing the Seacart 30 Thor at the peak of performance in these conditions. They clocked up another victory, to seal the Multi Racing class with four wins in a row and decided to return to base, while the others fought over the minor places. Right on their tail, but not close enough for handicap victory, the defending champion Alan Carwardine's 11.8m Asia Catamarans Hurricane had to settle on 2nd place overall and hand the trophy over to Thor. Despite Mick Coleman Java Yachting insisting a second race be held and winning it with a torn headsail, Peter Wood's Top Cat 2nd place in the final race was enough to give them 3rd overall, with Java Yachting displacing Andrew Hurford's Phantom V for 4th spot. Unfortunately, Henry couldn't be at the final prize-giving but said that he was "Thor but satisfied".

Although John Newnham's Twin Sharks didn't have it all their own way for most of the race, they eventually wore down the leaders on the last downwind, to claim their fifth win and successfully defended the Firefly 859 Sports title. Despite leading most of the race, Ian Coulson's Voodoo buried the bows on two occasions, which unsettled them allowing arch rival Twin Sharks to pass, but second overall was always on the cards. The young Japanese crew on Natsuki Motoyoshi's Mil Grace (Frog) stayed on pace with a second-place finish, securing third overall in the process. John Newnham let his secret to success slip out earlier in the regatta: “Hit the start line with speed, fly the hull to gain an extra 5 degrees pointing angle and boat speed in clear air and sail away in front.”

Despite day two’s two-race disappointment, Andrew DeBruin's Multihull Solutions H30 returned with speed to take victory on the final day but it was a little too late to completely recover. Second place for Paul Baker/John Priestly Pulse Yellow left them tied on points with Multihull Solutions H30 but dropping a 3rd place versus 2nd, gave Pulse Yellow victory by one point, in the Pulse 600 class. What started with a flourish Neil Ayre's Java Racing, ended with another withdrawal and 3rd overall in the three-boat class.

Perhaps the happiest of all the boat crews was the Cruising Multi class with enough wind to get the three displacement catamarans around the course in record time, while almost flying a hull. Another circumnavigation of Koh Lon for Rick Fielding's Fusion 40 MOJO gave her the daily double by three minutes over Robert Hossack's Raptor while Mike Spurle's Proud Cat was 20 seconds behind in third place. Although MOJO and Raptor tied on 6 points overall, it was broken in favour of MOJO for winning the last race.
Wind glorious wind! While most regattas have suffered from the lack of wind, this regatta has consistently turned it on, for all to enjoy. The only downside was the rate of carnage and bruised egos it left behind. The growth rate has increased, year on year, and the results have become an important gauge on what to buy, build or charter. While its winter in the Southern hemisphere, it's a perfect excuse to get away to foreign shores, for some fast tropical t-shirt and shorts racing. 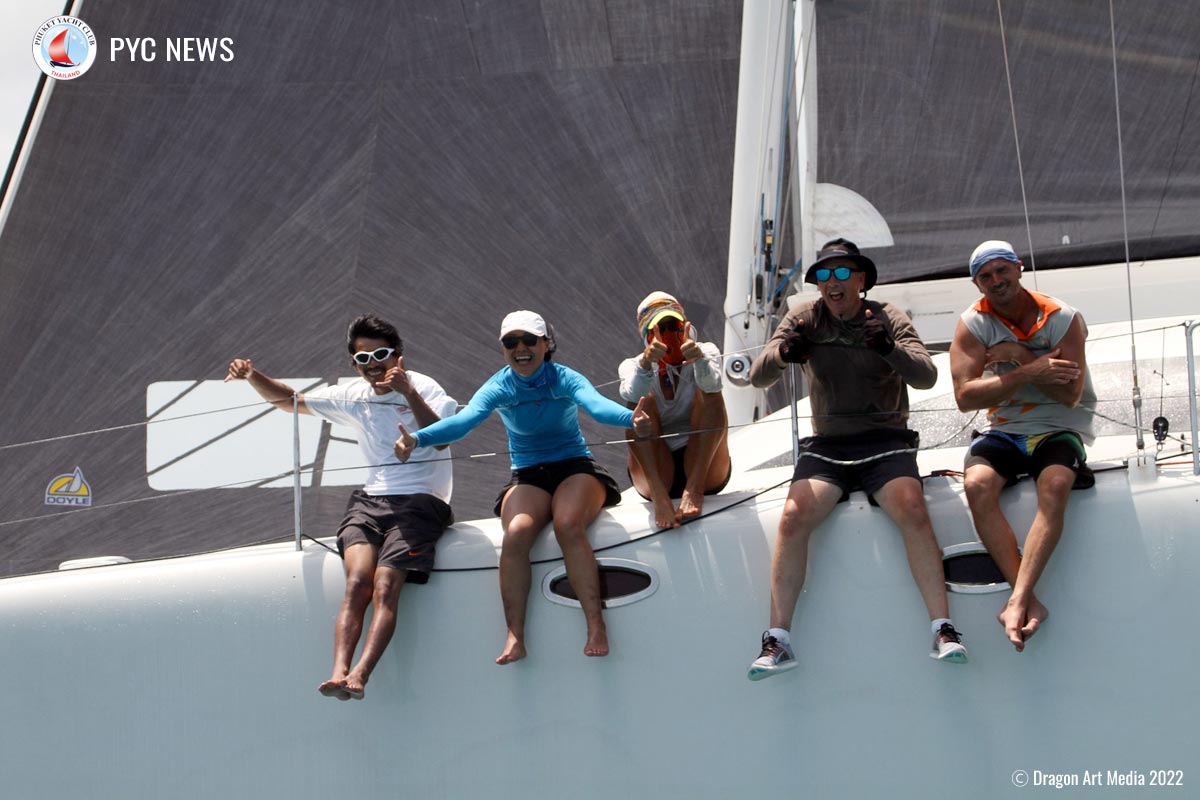 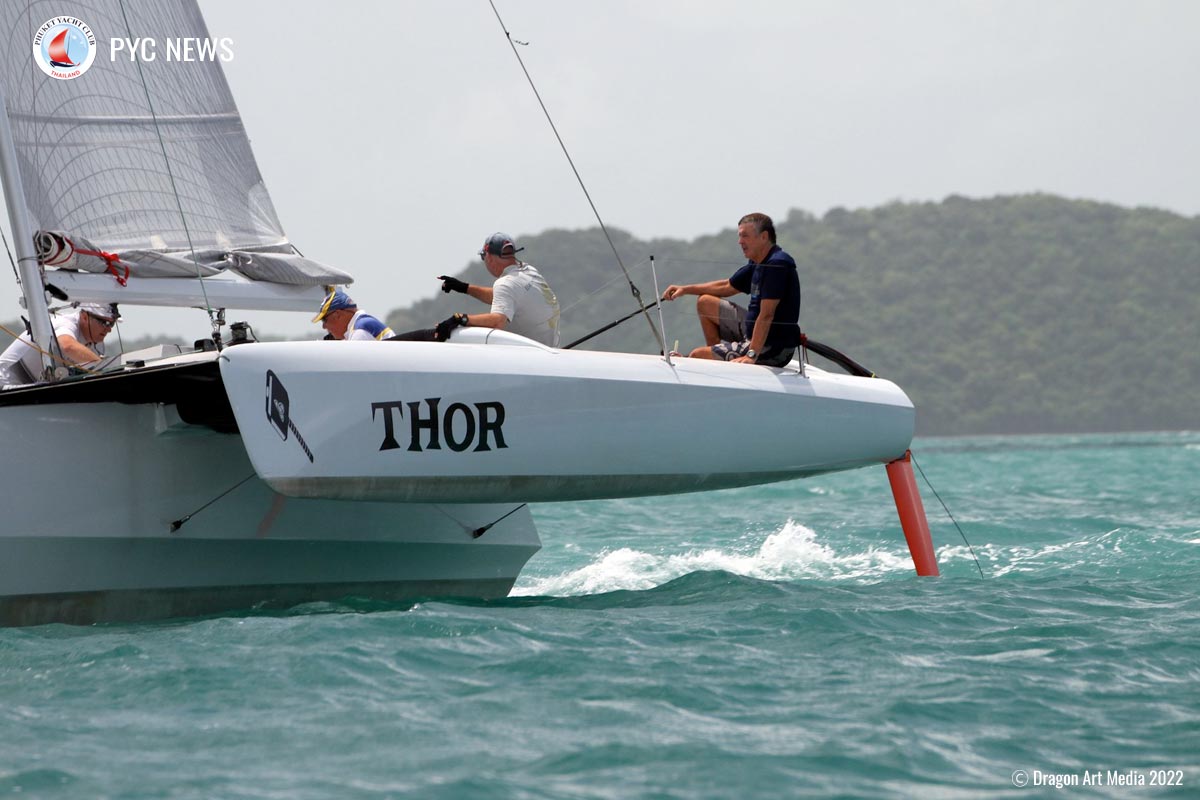 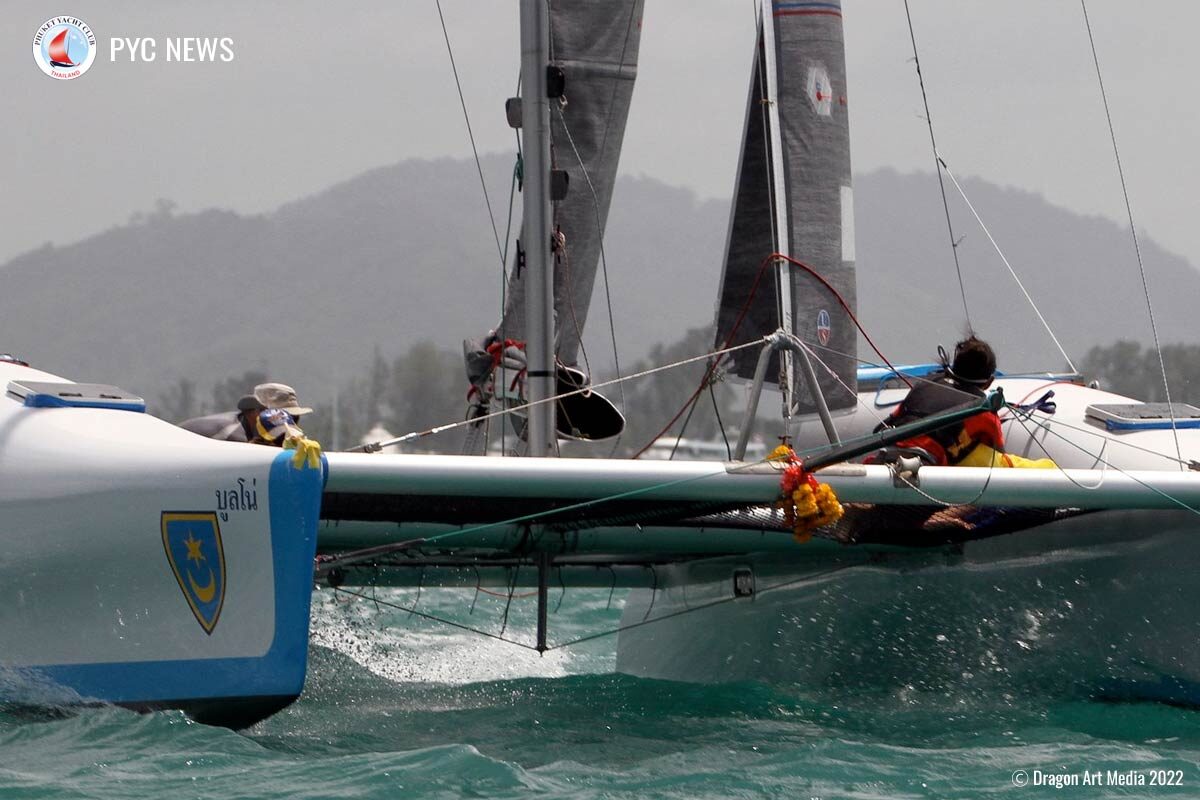 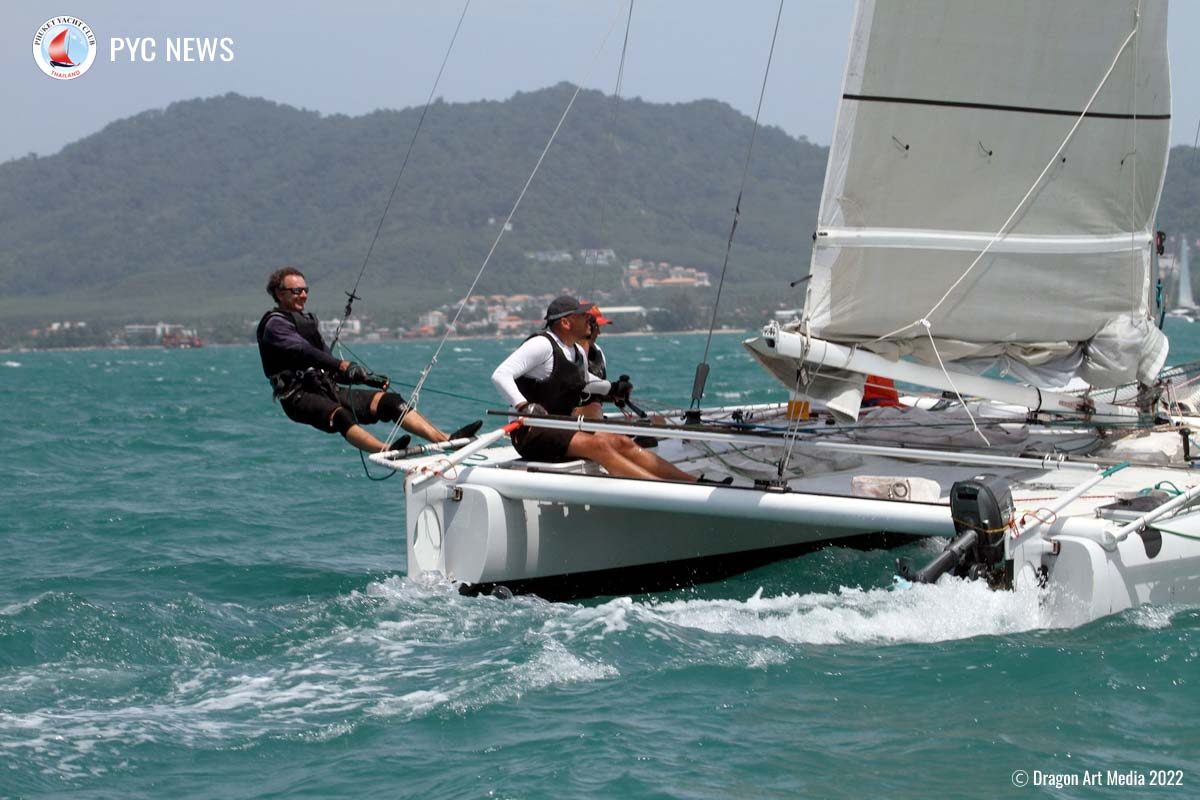 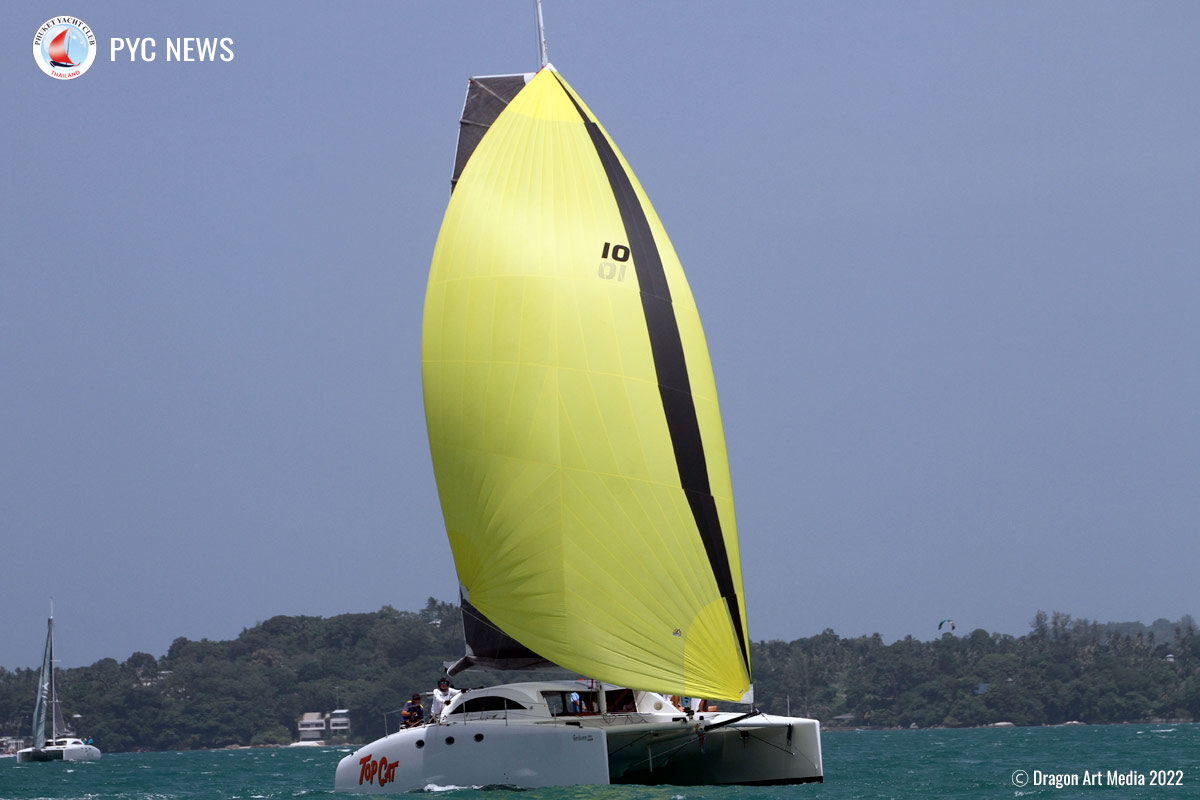 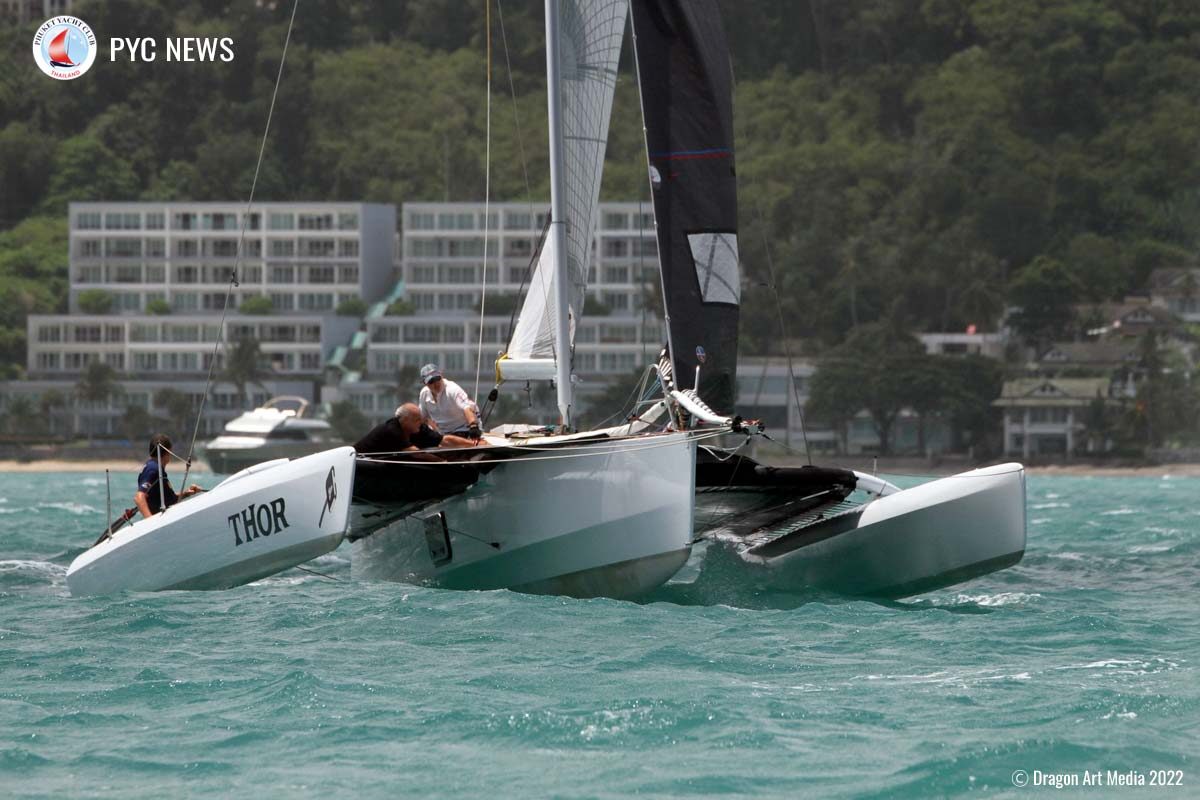 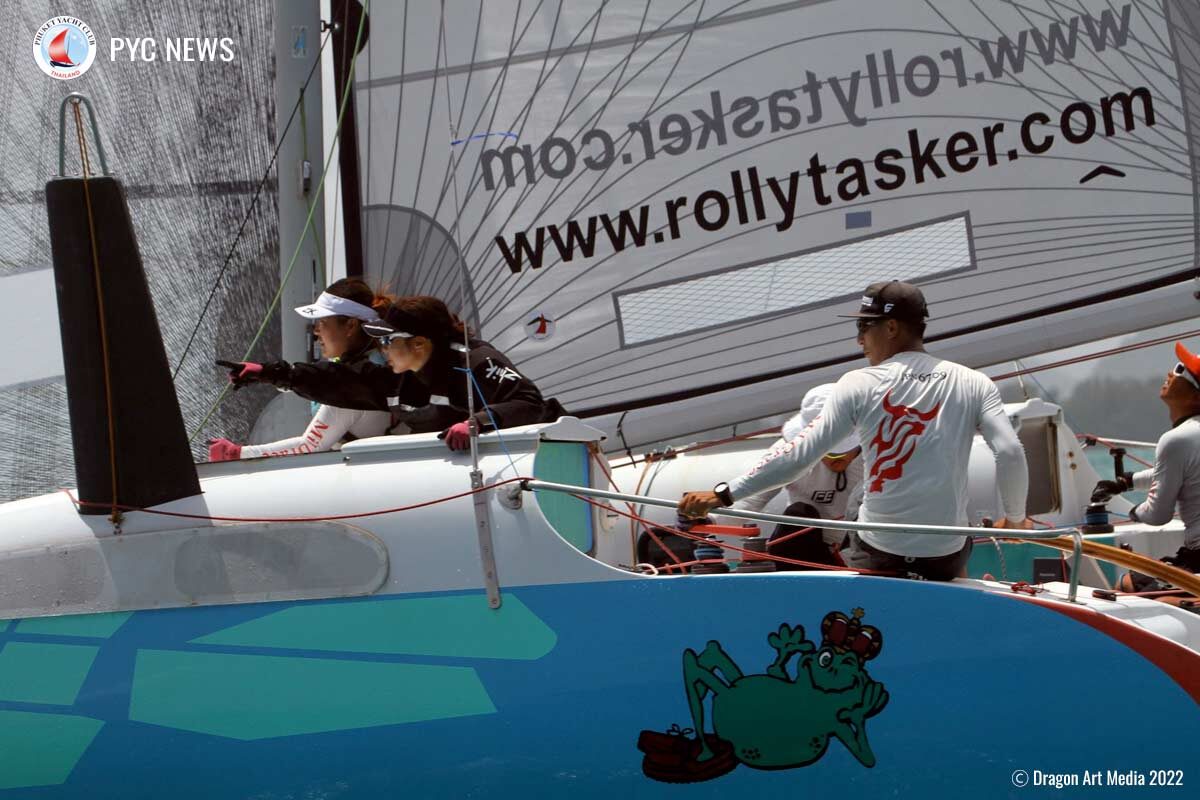 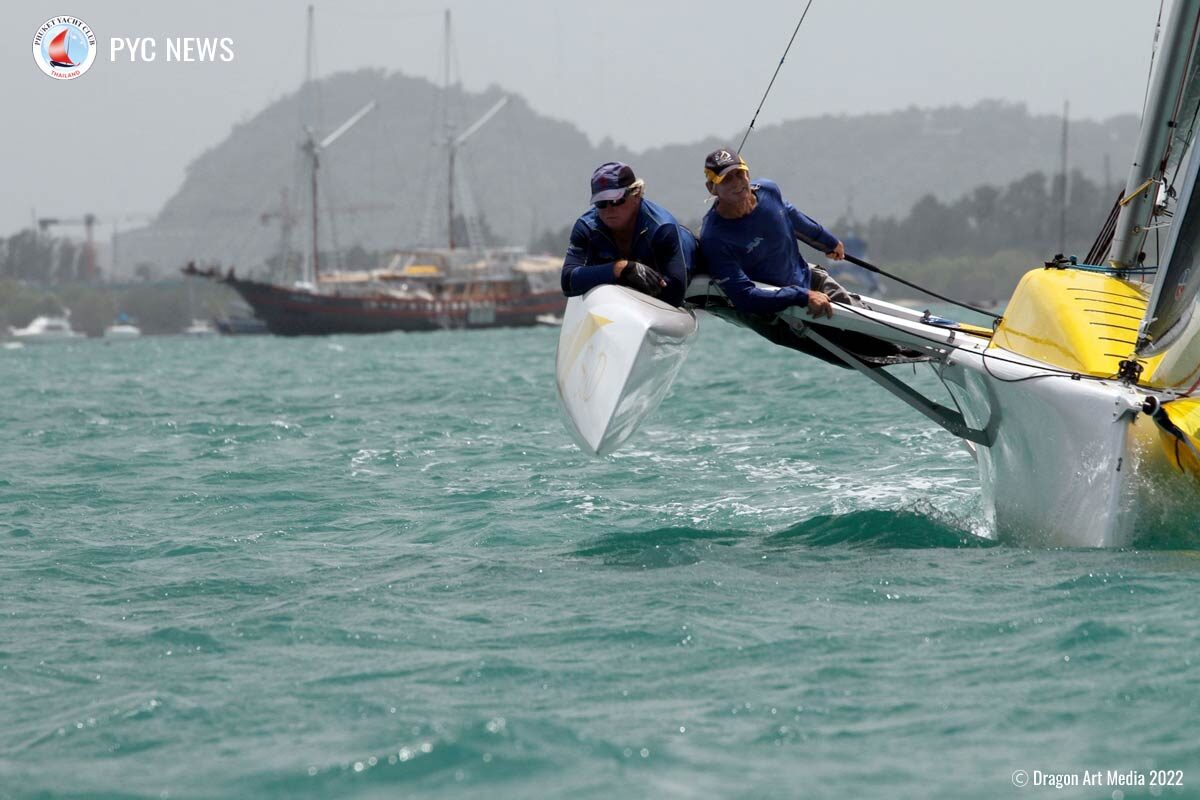 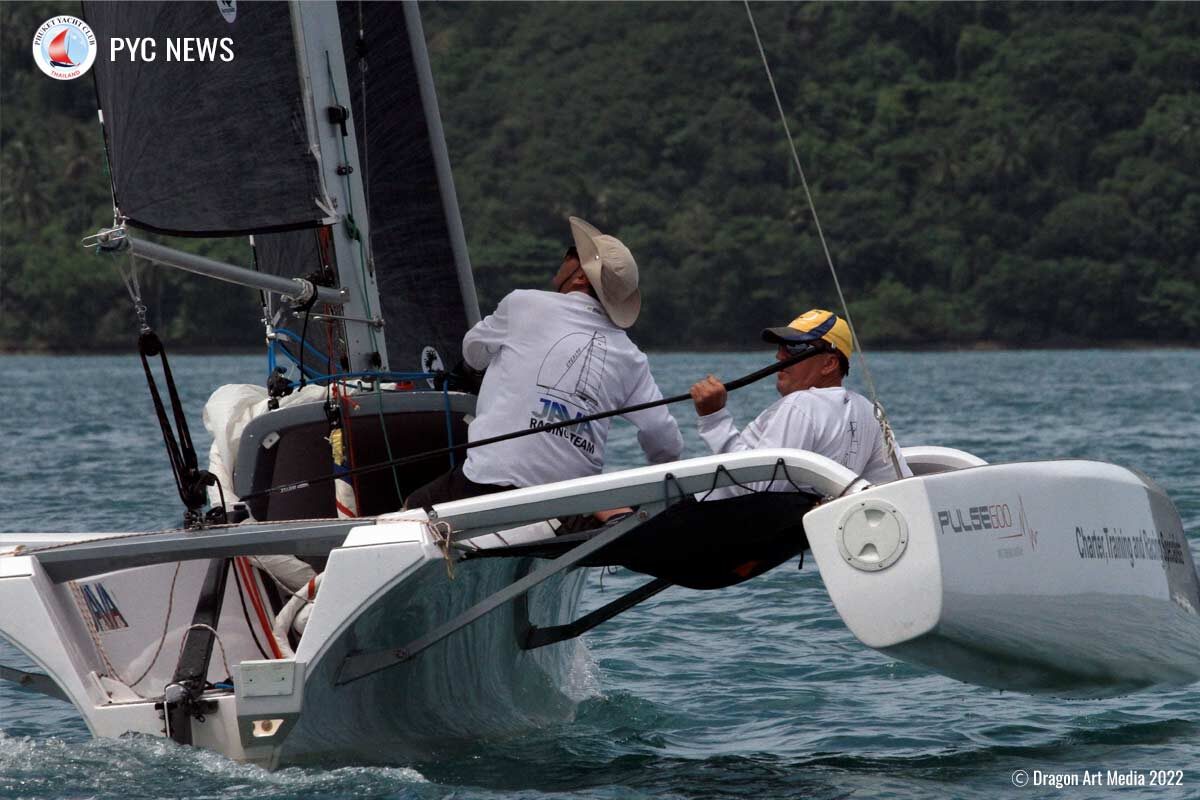